The third — and last entry –in the highly creative “Purge” trilogy, which began in 2013 with Ethan Hawke and Lena Headey’s wealthy family being attacked by purgers on the only night of the year when any and all crimes –including murder — are legal. The second entry, “The Purge: Anarchy” (2014), revolves around three groups of people trying to survive an annual Purge; their stories intertwine and come together when they join up with an ex-cop (Frank Grillo) out for revenge. This 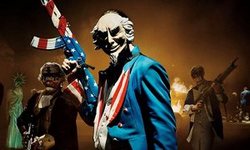 “Purge” — though lacking the locomotive-style excitement, intensity and gravitas of the sophomore effort, still titillates with new twists and turns — and new ways of killing. This time Grillo returns as the head of security for Senator Charlie Roan, a Presidential candidate targeted for death on Purge night because of her stance against the ruling right-wing “New Founding Fathers” and her anti-Purge sentiments. Though some plot points are telegraphed well in advance and are obvious, and you pretty much know who is going to get killed and when, the joy here is the execution of the stylish scenario and the well-wrought set pieces (nods to director James DeMonaco and cinematographer Jacques Jouffret) as you sit and wonder how the characters are going to survive the Purge and stay alive. And while the second “Purge” ended on a political note of the haves vs. the have-nots, there’s a great deal of right vs. left political sentiments thrown in for good measure this time around. And watch for the cool slap at some Russian tourist purgers. “The Purge — Election Year” is a fresh breeze in a summer of otherwise rancid sequels.Vitals: Director: James DeMonaco. Stars: Frank Grillo, Elizabeth Mitchell, Mykelti Williamson.
2016, CC, MPAA rating: R, 99 min., Thriller, Box office gross: $78.845 million, Universal.
Extras: Deleted scenes, “Inside the Purge” featurette, “Character Spotlight: Leo.”