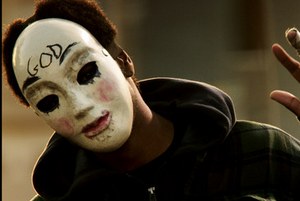 Writer-director-producer James DeMonaco’s sequel to his summer 2013’s sleeper hit takes place in a near-future Los Angeles as citizens once again get ready to prepare for the country’s yearly night of anarchy — The Purge — in which murder and mayhem is legalized for 12 hours in an effort to lower the crime rate for the rest of the year. This chapter follows a couple driving home whose car breaks down, stranding them just before The Purge commences; a police sergeant who goes out into the streets to get revenge on the man who killed his son; and a mother and daughter who run from their home after assailants destroy it. The armed-to-the-teeth sergeant takes the four under his wing as they attempt to survive the night, going up against petty criminals, murderers and a black ops operation. This outing takes the action out of the confines of the original (set in an upper-middle-class house) and broadens the scenario, bringing the story our into the streets where there’s plenty of excitement, twists and surprise. It’s bloody good fun with slick direction and solid acting. Extras: “Behind the Anarchy” featurette. Blu-ray adds deleted scenes. Vitals: Director: James DeMonaco. Stars: Kiele Sanchez, Frank Grillo, Zach Gilford, Carmen Ejogo, Nicholas Gonzalez, Michael K. Williams, Amy Paffrath, Brandon Keener, Branton Box, Niko Nicotera. 2014, CC, MPAA rating: R, 103 min., Horror-Thriller, Box office gross: $71.125 million, Universal.