Jerry Lewis directed, stared in, and co-wrote (with Bill Richmond) this parody of the classic “Dr. Jekyll and Mr. Hyde” tale that was selected for the U.S. National Film Registry by the Library of Congress in 2004. The four-disc set includes film Blu-ray and DVD versions of the film along with DVDs of two other well-known Lewis comedies, “Cinderfella” and “The Errand Boy.” The set was created with personal input from Lewis, who helped compile entertaining extra content. Highlights include a new featurette, 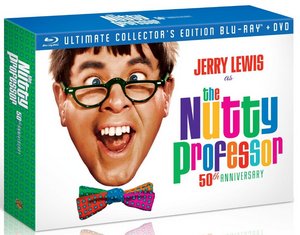 “Jerry Lewis: No Apologies,” an intimate look at “The King of Comedy”; a 48-page book of the film’s original story boards; a 44-page book of excerpts from Lewis’ cutting script with personal notes; a recreated “Being a Person” book, made up of drawings and quotes inspired/written by Lewis and drawn by his personal illustrator. (250 copies of this book were originally made and distributed to members of the cast and crew of “The Nutty Professor” after Lewis heard of general conflicts among them); a “Directors Letter” specially written by Lewis to present the new collection; and a CD collection, “Phoney Phone Calls, 1959-1972,” with private prank calls secretly recorded by Lewis during those years (years before the Jerky Boys were harassing unwitting shop clerks, housewives and businessmen, Lewis perfected the art, as these recordings show. Released in 2001 on the Sin-Drome label). <strong>Other extras:</strong> Commentary by Lewis and Steve Lawrence; “The Nutty Professor: Perfecting The Formula” behind-the-scenes footage; “Jerry Lewis at Work”; “Jerry at Movieland Wax Museum,” with commentary by son Chris Lewis; deleted scenes; Jerry and Stella promos; bloopers; screen tests; outtakes; original mono track; trailers. $54.99 from Warner Home Video.