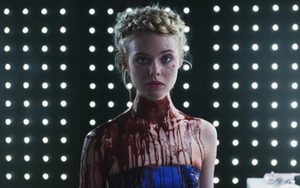 Jesse (Elle Fanning) moves to Los Angeles just after her 16th birthday to launch a career as a model. The head of her agency tells the innocent teen that she has the qualities to become a top star … but Jesse soon faces the wrath of ruthless vixens who despise her fresh-faced beauty. On top of that, she must contend with a seedy motel manager and a creepy photographer. As Jesse starts to take the fashion world by storm, her personality changes in ways that could help her against her cutthroat rivals. Another disappointing outing — the second — after Nicolas Winding Refn’s auspicious 2011 outing, the startling and outstanding “Drive.” Vitals: Director: Nicolas Winding Refn. Stars: Elle Fanning, Keanu Reeves, Christina Hendricks, Jena Malone, Abbey Lee, Bella Heathcote, Desmond Harrington, Jamie Clayton, Alessandro Nivola. 2016, CC, MPAA rating: R, 118 min., Thriller, Box office gross: $1.333 million, Broad Green Pictures. Extras: TBA.