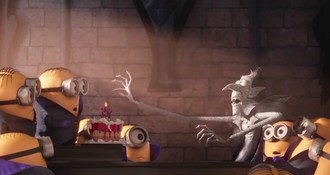 The breakout stars from the “Despicable Me” franchise headline their own movie. The story of Minions begins at the dawn of time. Starting as single-celled yellow organisms, Minions evolved through the ages, perpetually serving (and accidentally eliminating) the most despicable of masters. Continuously unsuccessful at keeping these masters — from T. rex to Napoleon — the Minions find themselves without someone to serve and fall into a deep depression. But one Minion named Kevin has a plan, and he — alongside teenage rebel Stuart and lovable little Bob — ventures out into the world to find a new evil boss for his brethren to follow. The trio embark upon a thrilling journey that ultimately leads them to their next potential master, Scarlet Overkill (Sandra Bullock), the world’s first-ever female super-villain. They travel from frigid Antarctica to 1960s New York City, ending in “mod” London, where they must face their biggest challenge to date: saving all of Minionkind … from annihilation. Vitals: Director: Pierre Coffin, Kyle Balda. Stars: Voices of Sandra Bullock, Jon Hamm, Michael Keaton, Allison Janney, Steve Coogan, Jennifer Saunders, Geoffrey Rush, Pierre Coffin. 2015, CC, MPAA rating: 91, PG min., Animated, Box office gross: $333.923 million, Universal. Extras: Deleted scene, “Jingle Bells Minion Style.” Blu-ray adds Three new original Mini-Movies: “Cro Minion,” “Competition,” “Binky Nelson Unpacified”; “Around The World Interactive Map” explores the world of the Minions with and features a collection of games, trivia, featurettes, storyboards, and more all themed to movie locations; “Behind the Goggles – The Illumination Story of the Minions” with eight “behind the googles” look at the history and evolution of the yellow henchmen; “Illumination Macguff Animation” seven-part exploration of the challenges and excitement behind the Minion characters and bringing them alive through animation in the movie.