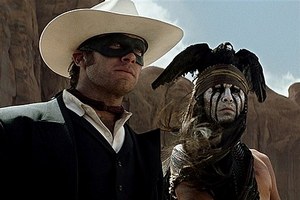 The famed masked hero is brought to life through new eyes. Native American spirit warrior Tonto (Johnny Depp) recounts the untold tales that transformed idealistic lawyer John Reid (Armie Hammer) into a legend of justice — as the two unlikely heroes must learn to work together and fight against greed and corruption in the Wild West. Shortly after the Civil War, Reid rides with his Texas Ranger brother to apprehend notorious bandit Bruce Cavendish and his gang. The Rangers are ambushed and the only survivor, Reid, is rescued by a renegade Comanche, Tonto, and brought back to life as the masked man. The pair pursue Cavendish and get involved in other adventures, including a Comanche uprising, fights with the U.S. cavalry, a blown-up silver mine, and an attempted takeover of the transcontinental railroad. Extras: Blooper reel; deleted scene; “Riding the Rails of The Lone Ranger” behind-the-scenes featurette on the train sequences; “Armies’s Western Road Trip” location tour; “Becoming a Cowboy” featurette that follows the cowboy (and cowgirl) cast to boot camp, where they got a chance to experience what their characters would really be living like in the Wild West. Vitals: Director: Gore Verbinski. Stars: Johnny Depp, Armie Hammer, Helena Bonham Carter, Tom Wilkinson, Ruth Wilson, William Fichtner. 2013, CC, MPAA rating: PG-13, 149 min., Western Action, Box office gross: $88.559, million, Warner.