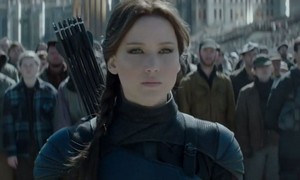 The film version of the second half of Suzanne Collins’ final “Hunger Games” book tidies up all the loose ends engendered by Part I as the 13 districts of the dystopian future America (Panem) go to war against the power of the Capitol. As the rebels move on the government, Katniss Everdeen (Jennifer Lawrence) — now taking on the symbolic role of the Mockingjay — teams up with a group comprised of hardened guerilla fighters and her closest friends to liberate the citizens of war-torn Panem and assassinate President Snow (played delightfully nasty by the always-smirking Donald Sutherland). Most of the film is given over to this platoon of fighters making their way to the heart of the city, where they must face mortal traps, dangerous enemies and moral choices. Most of the time the rebels make narrow video-game-style escapes (seemingly recycled from other sci-fi films, notably an attack by a group of white-skinned underground genetically engineered creatures called “mutts”) but the action is still fast and furious — and you know who to root for. It’s stirring and fun, and, as always, it’s a pleasure to watch Lawrence take command of the screen. And, oh yes, there’s treachery and hidden agendas galore as the film winds down. Revenge is sweet and the ending — as would be expected — is warm and sweet. The Blu-ray combo set contain more than five hours of special features. Vitals: Director: Francis Lawrence. Stars: Jennifer Lawrence, Willow Shields, Elizabeth Banks, Josh Hutcherson, Woody Harrelson, Sam Claflin, Jena Malone, Stanley Tucci, Liam Hemsworth, Jeffrey Wright, Donald Sutherland, Julianne Moore, Philip Seymour Hoffman. 2015, CC, MPAA rating: PG-13, 137 min., Action, Box office gross: $280.302 million, Lionsgate. Extras: Audio commentary with director Francis Lawrence and producer Nina Jacobson; “The Hunger Games: A Photographic Journey”; “Cinna’s Sketchbook: Secrets of the Mockingjay Armor”; “Panem on Display: The Hunger Games: The Exhibition.” Blu-ray adds “Pawns No More: Making The Hunger Games: Mockingjay – Part 2” eight-part documentary: “Walking Through Fire” (on concluding the saga), “Real or Not Real” (on visual design), “High-Value Targets” (on the acting ensemble), From Head to Toe” (costume, make-up & hair), “Navigating the Minefield” (production in Atlanta, Paris & Berlin), “Collateral Damage” (stunts, special effects & weapons), “Tightening the Noose” (the post-production process), and “A Different World” (reflections); “Jet to the Set.”