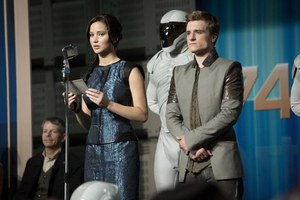 Even if you’re not a fan of the worldwide phenomenon that is “The Hunger Games,” there’s three very good reasons to see the second of the quartet of films based on the books: the formidable acting talents of Jennifer Lawrence, the presence of Philip Seymour Hoffman (as the new Gamemaker), and the firm directing hand of Francis Lawrence, who helmed one of our favorite (and overlooked) recent films, “Water for Elephants.” In this edition, Katniss Everdeen (Lawrence) and Peeta Mellark (Josh Hutcherson), whose victory in the 74th Hunger Games has sparked an insurrection of sorts in the 12 districts of Panem, become the enemies of the Capitol and, after a tour of the country, are forced to participate in the most diabolical games yet devised. The first hour is given over to the political machinations of the government and the beginnings of the rising insurrection, keying in on Katniss’ strengths and setting the stage for her role as a symbol for the dispossessed underclass; the second hour is devoted to the 75th Games and its tropical jungle death match, which Katniss and Peeta barely survive. If the first half is a little heavy on explication, the second half more than makes up for any wordiness with spectacular fight and special effects sequences. At the heart of the film is Lawrence, who imbues Katniss with an earthiness and honesty that makes her a modern-day cinematic hero. Despite Katniss coming out on top, however, there’s no resolution: You’ll have to wait for the two-part finale later this year and 2015: “The Hunger Games: Mockingjay – Part 1” and “The Hunger Games: Mockingjay – Part 2,” both of which are being directed by Lawrence. Extras: Commentary with director Francis Lawrence and producer Nina Jacobson, deleted scenes, sneak peek of “Divergent.” Blu-ray adds “Surviving the Game: Making Catching Fire” nine-part feature-length documentary. Vitals: Director: Francis Lawrence. Stars: Jennifer Lawrence, Willow Shields, Elizabeth Banks, Josh Hutcherson, Woody Harrelson, Sam Claflin, Jena Malone, Stanley Tucci, Liam Hemsworth, Jeffrey Wright, Lenny Kravitz, Philip Seymour Hoffman, Donald Sutherland, Amanda Plummer. 2013, CC, MPAA rating: PG-13, 146 min., Sci Fi Action, Box office gross: $418.019 million, Lionsgate.