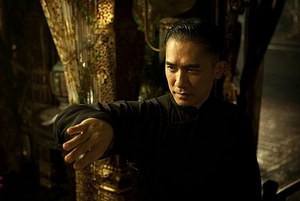 Director Wong Kar Wai is in love. In love with his actors and actresses, his stories, his camera, his movies … he’s in love with moviemaking. It shows in his films, which, for the most part, are love stories and romances — “Chungking Express” (1994), “In the Mood for Love” (2000), “2046” (2004), “My Blueberry Nights” (2007). “The Grandmaster” is no exception. It’s a love story to Ip Man, the famous martial arts grandmaster who popularized the wing chun style of fighting and who trained Bruce Lee; it’s a love story to China, to martial arts, to loyalty. Beautifully photographed and choreographed with some spectacular action scenes, the film follows Ip Man from the 1930s in Foshan, in Southern China, to his flight to Hong Kong after World War II and, in particular, his love for his art and for Gong Er, the daughter of one of the greatest grandmasters of all time, Gong Yutian. His love for Gong Er is never consummated, which is kind of the tone for the whole film: unrequited love. Despite the strong presence of Tony Chiu Wai Leung as Ip Man and Ziyi Zhang as Gong Er, the film falters in its languid and at-times muddled chronicle of Ip Man’s life and times. In Mandarin Chinese with English subtitles. Extras: “The Grandmaster: From Ip Man to Bruce Lee,” “A Conversation With Shannon Lee (daughter of Bruce Lee), “The Grandmaster: According to RZA,” behind-the-scenes footage. Vitals: Director: Wong Kar Wai. Stars: Tony Leung, Ziyi Zhang, Chang Chen. 2013, CC, MPAA rating: PG-13, 108 min., Action, Box office gross: $6.505 million, The Weinstein Company/Anchor Bay.