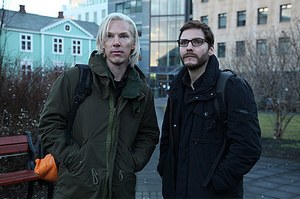 A muddled attempt to track the rise and fall of WikiLeaks — the muckraking website that leaked hundreds of thousands of pages of secret documents from governments around the world — its founder, Julian Assange, and its impact on the flow of information to news media and the world at large. The film follows Daniel Domscheit-Berg (Daniel Bruhl), an early supporter and eventual colleague of Assange (Benedict Cumberbatch), and Assange himself, as they rise from obscurity to worldwide notoriety. As the website flourishes, so does Assange’s megalomania, eventually alienating Domscheit-Berg and his supporters and friends. The film, unfortunately, lacks any coherence or vision in its depiction of government leaks and the people at the forefront of divulging secrets and bringing government transparency to the people of the world. Director Bill Condon has done much better work elsewhere (“Gods and Monsters,” “Kinsey,” “Dreamgirls”). Extras: “The Submission Platform: Visual Effects,” “In Camera: Graphics,” “Scoring Secrets,” trailers and TV spots. Vitals: Director: Bill Condon. Stars: Benedict Cumberbatch, Daniel Bruhl, Laura Linney, Stanley Tucci, Anthony Mackie. 2013, CC, MPAA rating: R, 124 min., Drama, Box office gross: $3.254, million, Disney.