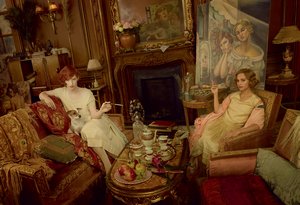 Alicia Vikander and Eddie Redmayne give tour-de-force performances in this quietly enthralling love story inspired by the lives of married artists Einar and Gerda Wegener. Set in 1920s Copenhagen and Paris, the film follows the transformation of successful landscape artist Einar into Lili Elbe — a woman inside him that he has had difficulty keeping down and who comes to the fore (in the film, at least), after he poses in female garb for Gerda, a struggling portrait artist. Their strong and loving marriage is shaken, but not destroyed, and Gerda supports Einar/Lili as he becomes a transgendered woman — and undergoes one of the first male to female gender change operations. Redmayne’s transformation is amazing and Vikander, at once soft and strong, standing up for her feelings yet not denying those of her “husband,” is stunning — she won an Oscar for Best Supporting Actress. The film is impeccably directed with a sure hand by Tom Hooper, who gave us “The King’s Speech” (2010) and “Les Miserables” (2012). Vitals: Director: Tom Hooper. Stars: Eddie Redmayne, Alicia Vikander, Ben Whishaw, Sebastian Koch, Amber Heard, Matthias Schoenaerts. 2015, CC, MPAA rating: R, 120 min., Drama, Box office gross: $9.719 million, Universal. Extras: “The Making of The Danish Girl.”