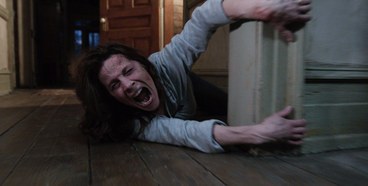 Ready for good, old-fashioned scares and frights — sans torture, gore and porn? Then “The Conjuring” is for you. Here’s a horror film that relies on editing and story line for its creepiness — it’s scares come from closing doors and creaking floors, much like the great horror films before special effects made it too easy to create chills. It revolves around real-life American paranormal investigators Ed and Lorraine Warren (Patrick Wilson, Vera Farmiga), who were called to help a family terrorized by a dark presence in a secluded farmhouse in Rhode island in 1971. It turns out the house was haunted by an accused witch, Bathsheba, who tried to sacrifice her children to the devil and killed herself back in 1863, and the Warrens must struggle long and hard to exorcise the house of the powerful demonic entity. The work of the pair inspired “The Amityville Horror.” Extras: “Scaring the “@$*%” Out of You” featurette. Blu-ray adds “The Conjuring: Face-to-Face With Terror” and “A Life in Demonology” featurettes. Vitals: Director: James Wan. Stars: Vera Farmiga, Patrick Wilson, Ron Livingston, Lili Taylor, Joey King, Shanley Caswell, Hayley McFarland, Mackenzie Foy, Kyla Deaveras, Sterling Jerinsas, Marion Guyot, Steve Coulter, Shannon Kook, John Brotherton. 2013, CC, MPAA rating: R, 112 min., Horror, Box office gross: $135.355 million, Warner.