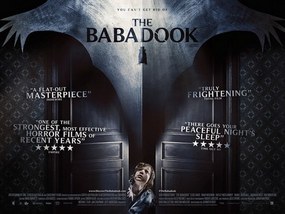 Six years after the violent death of her husband, Amelia (Essie Davis) is at a loss. She struggles to discipline her “out of control” 6-year-old, Samuel (Noah Wiseman), a son she finds impossible to love. Samuel’s dreams are plagued by a monster he believes is coming to kill them both. When a disturbing storybook called “The Babadook” turns up at their house, Samuel is convinced that the Babadook is the creature he’s been dreaming about. His hallucinations spiral out of control, he becomes more unpredictable and violent. And all attempts by Amelia to destroy the book fails, and the pair face a series of nightmarish situations. Vitals: Director: Jennifer Kent. Stars: Essie Davis, Noah Wiseman, Daniel Henshall, Tim Purcell, Tiffany Lyndall-Knight. 2014, CC, MPAA rating: NR, 94 min., Horror, Box office gross: $.899 million, IFC Films.