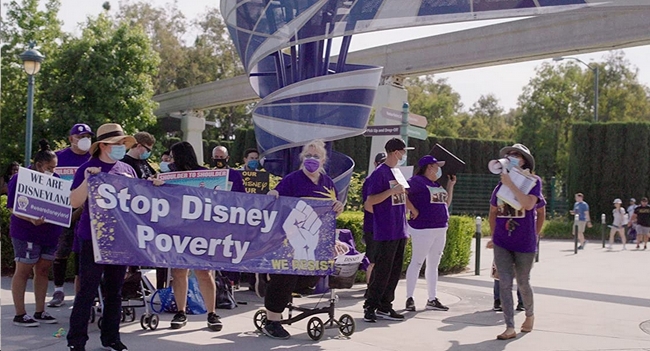 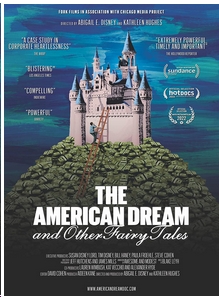 THE OFFICIAL 2022 SELECTION AT THE SUNDANCE FILM FESTIVAL

THE AMERICAN DREAM AND OTHER FAIRY TALES

Abigail E. Disney & Kathleen Hughes (The Armor of Light) Explores the Economic Inequality Crisis Plaguing the Nation in the Timely Documentary Arriving On Demand on December 20 From Fork Films

In this feature-length, personal essay documentary, The American Dream and Other Fairy Tales filmmaker and philanthropist Abigail E. Disney (The Armor of Light) grapples with America’s profound inequality crisis. The story begins in 2018, after Abigail encounters workers at the company that bears her name struggling to put food on the table. Could she, a descendent, with no role in the multinational conglomerate, use her famous last name to help pressure Disney and other American corporations to treat low-wage workers more humanely? Believing her conservative grandfather, Roy Disney, (Walt’s brother and company co-founder) would never have tolerated employee hunger at “The Happiest Place On Earth”, Abigail reexamines the story of modern American capitalism from the middle of the last century, when wealth was shared more equitably, to today, when CEO’s earn upwards of 800 times more than their average employees. What happened? What Abigail learns-about racism, corporate power, and the American Dream, is eye-opening, unexpected, and inspiring in that it begins to imagine a path to a fairer future for everyone.

Filmed over a two-year period, The American Dream and Other Fairy Tales expertly weaves together Abigail’s family story and the stories of Disneyland workers alongside commentary from historians, authors, and academics. The film artfully employs archive, animation, and never-before-seen Disney family movies. From the boardroom to the union hall, the film will no doubt jump-start urgently needed conversations about how to make American capitalism work for everyone. As Abigail concludes, “it won’t be easy, but with imagination and courage it can be changed.”

Founded in 2007 by Abigail E. Disney and Gini Reticker, Fork Films began with the acclaimed feature film Pray the Devil Back to Hell. Other original productions include the award-winning five-part PBS series Women, War & Peace, followed by Emmy-winning The Armor of Light and The Trials of Spring. Women, War & Peace II, the second installment in the critically acclaimed series, premiered on PBS in 2019. In addition to its original productions, Fork has funded over 100 documentary films including Crip Camp, One Child Nation, and Cameraperson, and the Academy Award®-nominated films Strong Island, The Square, and The Invisible War. Fork Films is committed to promoting peace, lifting marginalized voices, and building bridges across divided communities.