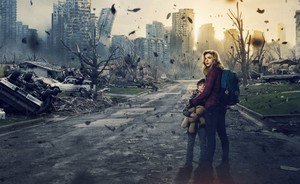 This science fiction actioner starts out with a bang and then peters out just past the half-way mark. In this Young Adult science fiction actioner, aliens attack the Earth in an effort to kill humankind – but salvage the planet; so rather than blast away with super weapons, they resort to other forms of destruction: magnetic pulses that cripple all electronic devices, earthquakes that cause worldwide tsunami, a bio-engineered plague, and then a ground invasion. Through it all a young Ohio girl (Chloe Grace Moretz) struggles to survive, and against a backdrop of fear and distrust, she sets out to save her younger brother as the aliens prepare the fifth and final wave. By this time, however, the storyline bogs down with unbelievable scenarios and plot miscues, wasting the talents of Moretz and co-stars Liev Schreiber Vitals: Director: J Blakeson. Stars: Chloe Grace Moretz, Liev Schreiber, Nick Robinson, Alex Roe, Maika Monroe, Maggie Siff, Maria Bello, Ron Livingston.. 2016, CC, MPAA rating: PG-13, 112 min., Science Fiction, Box office gross: $34.725 million, Sony. Extras: Commentary with director J Blakeson and Chloe Grace Moretz, two featurettes: “Inside The 5th Wave” and “Sammy on the Set.” Blu-ray adds gag reel, deleted scenes, three additional featurettes: “The 5th Wave Survival Guide,” “Training Squad 53” and “Creating a New World.”