YOU CAN’T WALK AWAY FROM YOUR DESTINY, YOU HAVE TO RUN TOWARDS IT 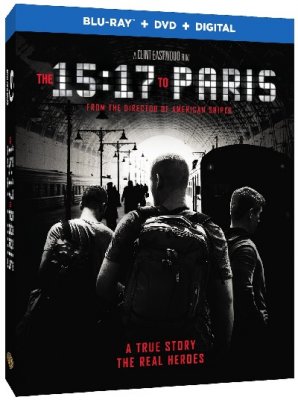 See the unique story of three friends who became heroes when “The 15:17 to Paris” arrives on Blu-ray Combo Pack, DVD and 4K Digital.

From Academy Award winning director* Clint Eastwood comes “The 15:17 to Paris,” which tells the real-life story of three men whose brave act turned them into heroes during a highspeed railway ride.

Behind the scenes, the creative team includes frequent collaborators Tom Stern, who served as cinematographer on 13 of Eastwood’s previous films, and Deborah Hopper, who has served as Eastwood’s costume designer on 17 prior films, editor Blu Murray, who most recently cut “Sully,” and the film’s composer, Christian Jacob. Veteran art director Kevin Ishioka, whose work can be seen in “Sully” and in “Dunkirk,” serves as production designer.

Fans can also own “The 15:17 to Paris” in 4K via purchase from digital retailers beginning May 1.

In the early evening of August 21, 2015, the world watched in stunned silence as the media reported a thwarted terrorist attack on Thalys train #9364 bound for Paris—an attempt prevented by three courageous young Americans traveling through Europe. The film follows the course of the friends’ lives, from the struggles of childhood through finding their footing in life, to the series of unlikely events leading up to the attack. Throughout the harrowing ordeal, their friendship never wavers, making it their greatest weapon and allowing them to save the lives of the more than 500 passengers on board.

o Join Spencer Stone, Alek Skarlatos and Anthony Sadler – the three Americans who stopped the attack – as they take us moment-by-moment through the real-life drama, just as they lived it.

o Join Oscar® winner Eastwood and his creative team as they reveal the aspects of the story that moved them and why they took the bold step of casting the three Americans to play themselves in the film.