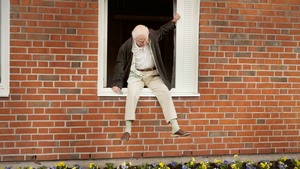 The highest-grossing Swedish film of all time. Based on the international bestseller of the same name by Jonas Jonasson, which has sold more than 6 million copies worldwide. The tale of centenarian Allan Karlsson (Robert Gustafson), a man who has spent his long and colorful life working in the munitions industry while getting entangled in historic events from the Spanish Civil War to the Manhattan Project. Finding himself stuck in a nursing home and determined to escape on his 100th birthday, Allan leaps out of a window and onto the nearest bus, kicking off an unexpected escapade involving, among other surprises, a suitcase stuffed with cash, some wicked criminals, and an elephant named Sonya. Like an unruly Nordic cousin of Forrest Gump, “The 100 Year Old Man Who Climbed Out the Window and Disappeared” offers Allan’s present-day exploits alongside flashbacks of his youthful adventures, with his passion for explosives attracting the attention of everyone from Joseph Stalin to Robert Oppenheimer to Ronald Reagan. Allan’s adventures of yesterday and today weave together into a delicious treat. In English and Swedish with English subtitles. Vitals: Director: Felix Herngren. Stars: Robert Gustafsson, Iwar Wiklander, David Wiberg, Mia Skaringer, Jens Hulten, Alan Ford. 2015 — Sweden, CC, MPAA rating: R, 115 min., Comedy, Box office gross: $.838 million, Music Box Films. Extras: Making-of featurette, cast and crew interviews, trailer.