The 1990s produced some classic movies that we still quote today and delight in watching again and again. Here are 10 that made film history. 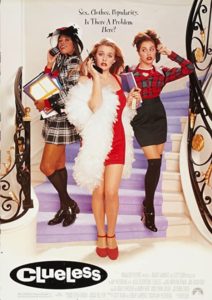 Written and directed by Amy Heckerling, Clueless immerses us in the world of a high school in Beverly Hills, seen through the eyes of teenage socialite Cher (Alicia Silverstone). This teenage comedy is delightful and witty, with some memorable one liners like “.. and may I remind you, it does not say RSVP on the Statue of Liberty.”

Based on Hunter S. Thompson’s book of the same name, a journalist and a lawyer make their way across America on a road trip fueled by drugs and alcohol. Fans of director Terry Gilliam (Monty Python and the Holy Grail, Time Bandits) will love this adventure comedy about the search for the American Dream.

Tim Robbins and Morgan Freeman do justice to the Stephen King novel on which the film was based. This drama is about a man sentenced to life imprisonment, even though he claims he is innocent. Fast forward 20 years and he is a key player in a money laundering scheme but has also befriended a long-term inmate. One of the key lines is “Fear can hold you prisoner. Hope can set you free.”

This Steven Spielberg epic shows the horror of the German Nazi reign and focuses on the true story of Oskar Schindler who saved 1100 Jews from being gassed at the Auschwitz concentration camp. Although he starts out as a greedy businessman, his factory eventually becomes a refuge for the most vulnerable. Liam Neeson takes the lead role as Oskar.

This fantasy romance directed by Tim Burton is a delightfully kooky tale of a constructed man — with scissors for hands as his creator dies before he can finish his creation. His life is somewhat lonely, until he meets a lady who introduces him to her world. At first he is accepted in this ‘new world’ but then things take a turn. Another brilliant classic from the world of Burton.

This hilarious comedy starring Ben Stiller and Cameron Diaz is one for the books. Ted (Stiller) hires a private investigator to track down his dream girl, Mary, from high school. The only problem is, this investigator wants Mary for himself. It becomes a comedic chase of which guy is going to get the girl.

Mike Myers has us rolling with laughter in a film about two friends trying to promote their basement TV show. Wayne (Myers) and Garth (Dana Carvey) have their show picked up by a local station but it gets reworked into something professional and just isn’t the same. The Wayne’s World soundtrack is also an old favorite, just like the online Bingo Australia offers.

In a film directed by Oliver Stone and written by Quentin Tarantino, we see two lovers (and killers) whose behavior is fueled by the attention they get from the media and who take a road trip that becomes a killing spree. The film earned critical acclaim for its visual storytelling and social commentary.

Two detectives, played by Brad Pitt and Morgan Freeman, are trying to catch a serial killer who uses the seven deadly sins as his reason for killing. This neo-film noir thriller tries to get into the mind of a killer, as the sociopath John Doe (Kevin Spacey) feels he is absolving the world of its sinful deeds.

What would the 90s be without a brilliant science fiction film under its belt. When a beautiful stranger leads computer hacker Neo (Keanu Reeves) to a forbidding underworld, he discovers the shocking truth — the life he knows is the elaborate deception of an evil cyber-intelligence. It becomes a battle against the machines when the powerful computer programs threaten to stop him in his tracks.

‘See How They Run’ Goes Retro on Digital Nov. 1