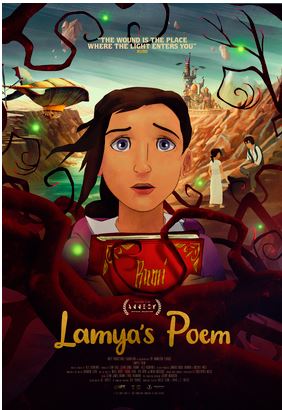 LAMYA’S POEM tells the story of a 12-year-old Syrian refugee girl named Lamya who tumbles into a dream world where she meets a poet and must help him write the poem that will save her life. When Lamya flees the violence of her country, she is given a book of poetry by the famous 13th-century poet, Rumi. As the perils of Lamya’s journey mount, the book becomes a magical gateway where she meets Rumi when he was a boy and also a refugee fleeing the violence of his time. In a shared dreamworld, they battle the monsters that follow them from their real-world situations, and Lamya must help young Rumi find his calling and write the poem that 800 years later will save her life.

Written and directed by Alex Kronemer, LAMYA’S POEM was produced by Alex Kronemer, Glenn James Brown, and Sam Kadi. The cast features Millie Davis as ‘Lamya’ – best known for her roles as Ms. O in the PBS Kids series ODD SQUAD, ‘Summer’ in the film WONDER, and ‘Gemma Hendrix’ in the series ORPHAN BLACK, Faran Tahir as ‘Baha Walad’ – best known for his roles as ‘Raza’ in IRON MAN and ‘Captain Robau’ in STAR TREK, and Mena Massoud as ‘Rumi’ – who plays Aladdin in Disney’s live-action remake of Aladdin directed by Guy Ritchie and ‘Tarek Kassar’ in the series TOM CLANCY’S JACK RYAN.

The animation studio is award-winning animation studio PIP Animation, based in Ontario, Canada. PIP Animation has been involved in numerous animated features and TV specials that reach worldwide audiences. THE CAT IN THE HAT, WANDERING WENDA, CAILLOU, CYBER CHASE, THROUGH THE WOODS, PIRATE’S PASSAGE, and the Netflix original series, THE UMBRELLA ACADEMY.