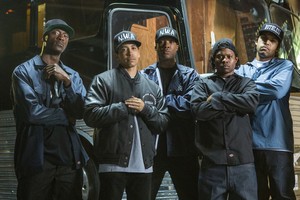 The true story of how five young cultural rebels — armed only with their lyrics, swagger, bravado and raw talent — stood up to the authorities that meant to keep them down and formed the world’s most dangerous music group, N.W.A. They spoke the truth and exposed life in the hood, and their voices ignited a musical and social revolution that is still reverberating today. Includes 20 additional minutes. Vitals: Director: F. Gary Gray. Stars: O’Shea Jackson Jr., Corey Hawkins, Jason Mitchell, Neil Brown Jr., Aldis Hodge, Paul Giamatti. 2015, CC, MPAA rating: R, 147 min., Drama, Box office gross: $161.058 million, Universal. Extras: “N.W.A. The Origins,” in which Dr. Dre, Ice Cube, DJ Yella, and many others talk about N.W.A.’s start in the 80s and how it all began; “Impact,” an exploration of the impact of N.W.A. and their breakout album; “Director’s Journey” featurette; “The Streets: Filming in Compton” featurette; “N.W.A Performs in Detroit”; commentary with director-producer F. Gary Gray. Blu-ray adds deleted scenes; “Becoming N.W.A.” casting featurette; never before seen performance.