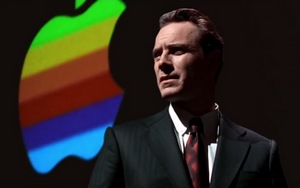 “Steve Jobs” is an interesting if not in-depth look at Steve Jobs, the co-founder of Apple and one of the chief architects of the digital age. The film — almost a theatre piece, with its emphasis on dialogue over action and its three-act structure — is set backstage at three iconic product launches spearheaded by Jobs: the launch of the Macintosh in 1984, the unveiling of NeXT computers in 1988, and the release of the iMac in 1997. At each juncture Jobs interacts with marketing chief Joanna Hoffman (Kate Winslet), Apple co-founder Steve Wozniak (Seth Rogen), Apple CEO John Sculley (Jeff Daniels), his daughter Lisa Brennan and his ex-lover Chrisaan Brennan. Though based on Walter Isaacson’s well-rounded, best-selling biography of Jobs, this Danny Boyle-directed film — written by Aaron Sorkin, who also wrote “The Social Network” — depicts the man solely as a self-centered jerk who was “cruel and inhumane” to everyone around him. It’s a narrow view of the visionary who gave us the iPod and the iPhone, and though mildly entertaining, it’s forgettable filmmaking. “Steve Jobs” has garnered Oscar nominations for Best Performance by an Actor in a Leading Role for Fassbender and Best Performance by an Actress in a Supporting Role for Kate Winslet. Vitals: Director: Danny Boyle. Stars: Michael Fassbender, Kate Winslet, Seth Rogen, Jeff Daniels. 2015, CC, MPAA rating: R, 122 min., Drama, Box office gross: $17.766 million, Universal. Extras: “Inside Jobs: The Making of Steve Jobs,” commentary with director Danny Boyle, commentary with writer Aaron Sorkin and editor Elliot Graham.