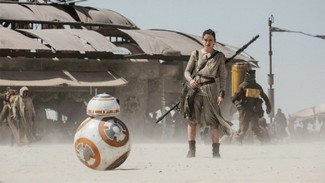 This first of three sequels to “Star Wars” shattered box office opening-week records to become the highest grossing U.S. film of all time with over $930 million domestic, and the second-highest worldwide grossing film (behind “Avatar”) with $2.82 billion worldwide. Thirty years following the battle of Endor, the Resistance is still hard at work rebuilding the galaxy from the ashes of the Empire — but find themselves in trouble when Luke Skywalker, the last of the Jedi, disappears — and remnants of the Empire, calling themselves the First Order, threaten to unleash the Dark Side on the universe. A young Resistance pilot (Oscar Isaac) teams with a scavenger from the planet Jakku (Daisy Ridley), an ex-Stormtrooper named Finn (John Boyega) and Han Solo (Harrison Ford) and Chewbacca (Peter Mayhew) to track down Skywalker, keeping one step ahead of the nasty dark warrior Kylo Ren (Adam Driver) and the forces of the Dark Side. There’s plenty of new faces (including a new droid, BB-8, and a new Supreme Leader, Snoke, played by Andy Serkis) and old (in addition to Ford, Mayhew and Mark Hamill, Carrie Fisher shows up as General Leia Organa) — there’s even a guest appearance by C-3PO. Almost a retelling of the original “Star Wars” saga, director J.J. Abrams’ “The Force Awakens” infuses this myth — and the franchise — with new blood and energy. There are some faults, mainly the underwhelming performances by Ridley and Boyega, some cheesy special effects sequences (in particular the attack of the rathtars on the freighter manned by Solo and Chewbacca), and a bit too much buddy-boy gee-whiz excitement on the part of Isaac and Boyega. For the most part, though, this “Star Wars” is a terrific sci-fi joy ride with clear cut heroes and villains, fairly tight direction, and, aside from my quibbles above, good acting. The home video release is a class act, from the cool, jet-black plastic Blu-ray case to the plethora of neat bonus features. And don’t forget the best part of the film — the forever young Harrison Ford as Han Solo, still a wisecracking, hard-fighting, intergalactic hipster. Vitals: Director: J.J. Abrams. Stars: Daisy Ridley, John Boyega, Adam Driver, Oscar Isaac, Lupita Nyong’o, Domhnall Gleeson, Harrison Ford, Carrie Fisher, Mark Hamill, Anthony Daniels, Peter Mayhew. 2015, CC, MPAA rating: PG-13, 136 min., Science Fiction, Box office gross: $930 million, Disney. Extras: “Secrets of The Force Awakens: A Cinematic Journey” behind-the-scenes documentary; “The Story Awakens: The Table Read”; “Building BB-8”; “Crafting Creatures”; “Blueprint of a Battle: The Snow Fight”; “John Williams: The Seventh Symphony”; “ILM: The Visual Magic of The Force”; “Force For Change”: Heroes come in all shapes and sizes. See how the “Star Wars: Force for Change” initiative has united Star Wars fans all over the globe to help others; deleted scenes.