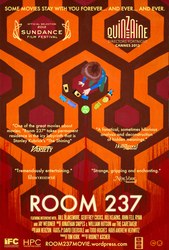 Stanley Kubrick’s adaptation of Stephen King’s “The Shining” was released in May 1980 to mixed reviews and a slow but steady boxoffice (topping out at a very respectable $44 million by year’s end). As with all of Kubrick’s work, it was a multilayered affair, ripe with allusions and meanings. But unlike other Kubrick films, a cult of interpreters sprang up around “The Shining,” fans who claimed to have decoded the film’s “secret messages” addressing everything from the genocide of Native Americans to a range of government conspiracies. This documentary takes a look at some of the complex theories that attempt to deconstruct the film and create a new meaning out of “the hidden symbols and messages” embedded in Kubrick’s scenario. We hear from some of the people who have reworked the film to match their own ideas; “The Shining” is examined inside and out, backwards and forwards (and, as one theorist urges, the film is literally played forward and backwards simultaneously to note overlapping images and symbols), intercutting it with layers of dreamlike imagery to illustrate their streams of consciousness. It’s a bit too much at times, kind of reminiscent of the “Paul Is Dead” conspiracy; if nothing else, it’s a fun endeavor. (In case you forgot, Room 237 is where some rather nasty stuff takes place in the film). Extras include featurettes and deleted scenes. Vitals: Director: Rodney Ascher. 2013, CC, MPAA rating: NR, 102 min., Documentary, Box office gross: $.259 million, IFC Films.