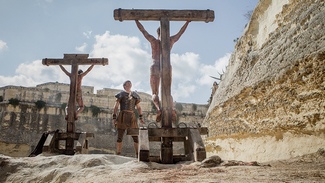 Biblical story of the Resurrection, as told through the eyes of a non-believer. Clavius (Joseph Fiennes), a powerful Roman military tribune, and his aide, Lucius (Tom Felton), are tasked with solving the mystery of what happened to Jesus in the weeks following the crucifixion, in order to disprove the rumors of a risen Messiah and prevent an uprising in Jerusalem. Vitals: Director: Kevin Reynolds. Stars: Joseph Fiennes, Tom Felton, Cliff Curtis, Peter Firth, Leonor Watling. 2016, CC, MPAA rating: PG-13, 107 min., Drama, Box office gross: $36.682 million, Sony. Extras: Three featurettes: “The Mystery of the Resurrection: Making Risen,” “A.D. Jerusalem,” “Script to Screen”; commentary. Blu-ray adds deleted scenes, a fourth featurette: “The Battle of the Zealots Deconstructed.”