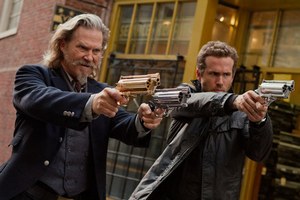 I really wanted to like “R.I.P.D.” It had gotten such bad buzz before it opened, and then such a lukewarm reception by the critics, that I wanted to give the film the benefit of the doubt and be generous with what — in concept — sounded like a great idea: A police force made up of dead cowboys and deceased cops whose mission was to return to the “other side” monstrous spirits still roaming the Earth (the screenplay was based on the Dark Horse graphic novel). Unfortunately, however, the whole affair came off as a re-purposed “Men in Black,” right down to the use of secret entrances to the agents’ headquarters, the pairing of a grizzled veteran (Jeff Bridges as a long-dead old West gunslinger) and a newbie (Ryan Reynolds as a recently dead cop), and outlandish bodies for the evil spirits once their human facades are stripped off. The plot: Reynolds, on the verge of becoming a dirty cop, is killed in the line of duty and in order to redeem himself, he’s forced to join the Rest in Peace Department and, with veteran dead sheriff Roy Pulsifer (Bridges), has to track down criminals trying to escape final judgment. They soon uncover a plot to open a tunnel between Earth and the afterlife that would begin sending angry souls the wrong way, an action that could end life as we know it. Despite sporadic spectacular special effects, the film drags, especially in lengthy “talky” scenes between Bridges — here making a mockery of his “True Grit” persona — and Reynolds. And the one original bit — both men have avatars that represent them when they’re seen by the living, a Chinese man for Reynolds, a sexy woman for Bridges — falls flat because of stilted acting and pacing. Extras: Deleted and alternate scenes, gag reel, “Transferring R.I.P.D. – The Making of.” Blu-ray adds alternate openings, “R.I.P.D Motion Comics: Bringing the Avatars to Life,” “Nick’s New Avatars,” “Filming the Other Side,” “Walking Among Us: Deados & Avatars,” “Anatomy of a Shootout.” Vitals: Director: Robert Schwentke. Stars: Jeff Bridges, Ryan Reynolds, Kevin Bacon, Mary-Louise Parker. 2013, CC, MPAA rating: PG-13, 96 min., Supernatural Action Comedy, Box office gross: $32.731 million, Universal.