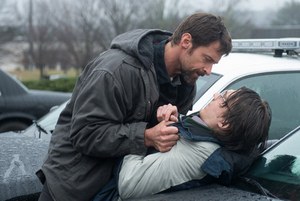 A revenge thriller that has pretensions to be more than it is — a pulp police procedural that borrows from “Silence of the Lambs” and “Taken” but without those films’ attention to solid plotting and characterization. Keller Dover (Hugh Jackman) plays a survivalist-type working man in rural Pennsylvania whose daughter is kidnapped; when the local police, headed up by out-of-his-league Detective Loki (Jake Gyllenhaal) dismisses the only suspect, a weird young man (Paul Dano) driving a dilapidated RV near the scene of the abduction, for lack of evidence, Keller takes the law into his own hands — with dire consequences (and a double twist of an ending). Extras: Two featurettes: “Prisoners — Every Moment Matters,” “Prisoners — Powerful Performances.” Vitals: Director: Dennis Villeneuve. Stars: Hugh Jackman, Jake Gyllenhaal, Viola Davis, Maria Bello, Terrence Howard, Melissa Leo, Paul Dano. 2013, CC, MPAA rating: R, 153 min., Thriller, Box office gross: $59.127 million, Warner.