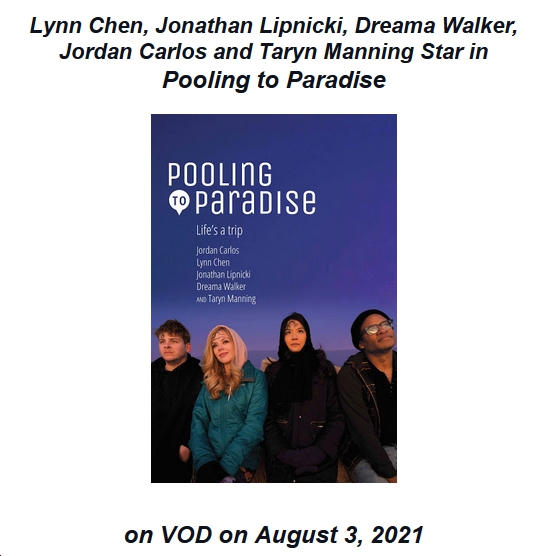 POOLING TO PARADISE is an indie comedy about a ride share that turns into an unexpected road trip to Paradise, NV. Four strangers, each at a cross-worlds in their lives, find unexpected connections that change their view on life. The film will debut on VOD and DVD on August 3, 2021.

Jenny (Lynn Chen, Saving Face, Go Back To China), a Los Angeles mom, leaves her family for a blogger convention in Vegas, and accidentally chooses “pool” on her rideshare app, placing her in a car full of strangers including struggling activist Kara (Dreama Walker, Once Upon a Time in Hollywood, Gran Torino), heartbroken talent agent Sean (Jonathan Lipnicki,The Resident, Jerry Maguire) on a quest to find Dawn (Taryn Manning, Orange is the New Black, Hustle and Flow), and their hipster/anarchist/shaman driver, Marc (Jordan Carlos, First Wives Club, Broad City). Personalities clash, vulnerabilities unwind, and bonds form as they each find their own personal Paradise. Full of humor, heart, pathos and a psilocybin drug trip in Death Valley, Jentis’ script is a relatable millennial road trip rom-com perfect for summer.
POOLING TO PARADISEis written and produced by Caytha Jentis (Bad Parents, The Other F Word). The film was directed by Roxy Shih (Mira Mirar) and Angela Pedraza (Joyride) served as Producer. Executive Producer Jared Safier handles the films’ sales. It recently opened the 2021 Ft. Myers Film Festival and won Best Feature. It was also the opening night film at the Female Eye Film Festival. The film was an official selection at the Santa Monica International Film Festival.
The film will be distributed domestically by SP Releasing and released on VOD August 3, 2021 on several platforms including Amazon, Vudu, Comcast, Charter and more. It will also be available on DVD in Walmart’s across the country. For more information about the film, please visit https://www.poolingtoparadise.com.

Restored ‘Ozzie and Harriet’ Has Adventures on Digital, Disc June 21