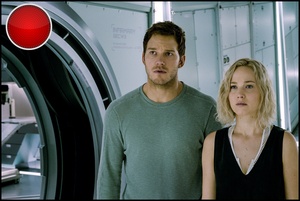 “Passengers,” a sci-fi yarn about an interstellar spaceship on a 90 year mission to a distant planet that malfunctions and wakes one of its hibernating passengers too early, is a B-film outing with an A-list cast and A-list special effects. The film begins as an existential journey when the Avalon, with some 5200 sleeping colonists and crew members headed across the galaxy, is bombarded by meteors, causing the computer to malfunction and awaken Jim (Chris Pratt), who, faced with nothing but robots and holograms, must eke out a lonely existence before figuring out a way to find companionship. That comes in the form of Aurora (Jennifer Lawrence), a writer also on her way to the new world. The rest of the film revolves around their love story and their subsequent efforts to save the now deteriorating spacecraft from destruction. Viewers looking for a “Star Wars” actioner will have to look elsewhere for their sci-fi fix; this is basically a love tale between two gorgeous people, set on a spaceship. There’s solid acting by Pratt and Lawrence, and their chemistry holds the film together. Aside from the spectacular special effects that creates a “real” spaceship in “real” space, the film is fairly predictable. Vitals: Director: Morten Tyldum. Stars: Chris Pratt, Jennifer Lawrence, Michael Sheen, Laurence Fishburne, Inder Kumar, Jamie Soricelli. 2016, CC, MPAA rating: PG-13, 116 min., Science Fiction, Box office gross: $97.986 million, Sony. Extras: “Outtakes from the Set”; three featurettes: “Casting the Passengers,” “Creating the Avalon” and “On Set with Chris Pratt”; “Book Your Passage”: Looking for a new life? Learn more about the Homestead Company. See what awaits you. Blu-ray adds deleted scenes, “Space on Screen: The Visual Effects of Passengers” featurette.