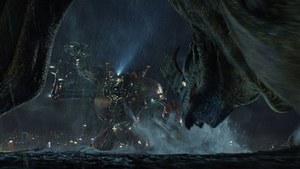 Guillermo del Toro has come a long way since “Mimic” (1997) and “The Devil’s Backbone” (2001). His horror instinct led him to direct “Hellboy” (2004) and the award-winning “Pan’s Labyrinth” (2006) and write “Don’t Be Afraid of the Dark” as well as the “Hobbit” outings (and produce a host of horror and dark dramas). He’s certainly produced and written more films than he’s helmed. So fans who have been eagerly awaiting a new directorial effort on his part (it’s been five years since “Hellboy II: The Golden Army”) won’t be disappointed with “Pacific Rim,” a solid modern CGI-driven monster flick that can only be described as Godzilla meets the Transformers. The plot is simple — Legions of gigantic, monstrous creatures, known as Kaiju, rise from another “world” through a breech in the Pacific Ocean, bent on destroying mankind and consuming the Earth’s resources. To combat them, the world’s armies cooperate to build massive robots, called Jaegers, which are controlled simultaneously by two pilots whose minds are locked in a neural bridge. But it’s a losing battle until a washed up former pilot (Charlie Hunnam) and an untested trainee (Rinko Kikuchi) are teamed to drive a legendary but seemingly obsolete Jaeger from the past. Though the story line is a bit silly and full of holes, one easily suspends disbelief to savor del Toro’s style and flourish and his fantastic images. It’s a slam-bam action-adventure that doesn’t ask you to think too much — you just need to crank up the volume and allow the images to wash over you. Extras: Commentary by director-screenwriter Guillermo del Toro, “Drift Space,” “The Digital Artistry of Pacific Rim,” “The Shatterdome,” “Focus Points,” deleted scenes, blooper reel. Blu-ray adds “The Directors Notebook.” Vitals: Director: Guillermo del Toro. Stars: Charlie Hunnam, Idris Elba, Rinko Kikuchi, Charlie Day, Rob Kazinsky, Max Martini, Clifton Collins Jr., Burn Gorman, Ron Perlman. 2013, CC, MPAA rating: PG-13, 131 min., Sci Fi Action, Box office gross: $100.366 million, Warner.