OUT OF NOWHERESVILE SET FOR NOVEMBER RELEASE 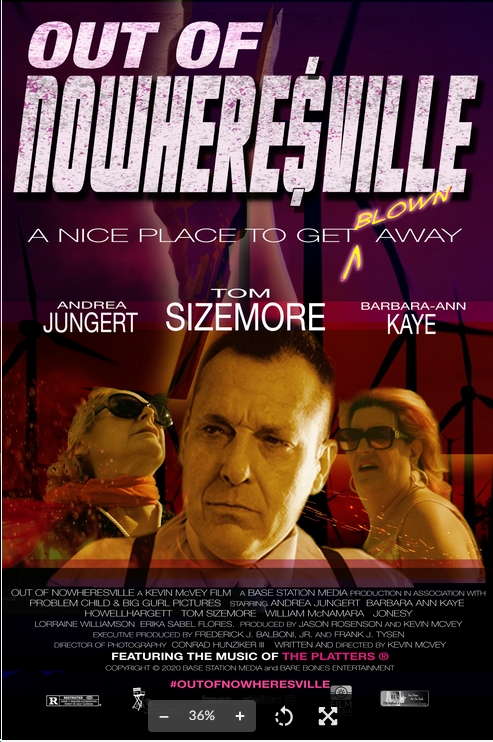 Freestyle Digital Media, the digital film distribution division of Byron Allen’s Allen Media Group/Entertainment Studios, has acquired North American VOD rights to the action-thriller OUT OF NOWHERESVILLE. OUT OF NOWHERESVILLE will be available to rent and own on North American digital HD internet, cable, and satellite platforms on November 30, 2021 through Freestyle Digital Media.

In OUT OF NOWHERESVILLE, the lives of a woman (Andrea Jungert) and her best friend (Barbara Ann Kaye) are turned upside down after they stumble onto a dead body and nearly one million dollars in cold, hard cash. Forced to make choices that will change them forever, they embark on a deadly road trip, filled with a cast of characters such as a sermonizing preacher (Tom Sizemore), a crooked detective (Howell Hargett) and a by-the-book DEA agent (William McNamara). It’s a fast-paced action-thriller with a cast of unlikely female protagonists, perfectly suited for our time.

OUT OF NOWHERESVILLE was produced by Kevin McVey, Jason Rosenson and Barbara Klickstein and Executive Produced by Frederick J. Balboni, Jr. and Frank J. Tysen. The OUT OF NOWHERESVILLE soundtrack features the music of the Rock & Roll and Grammy® Hall of Fame vocalists, The Platters®. The quintet achieved worldwide success with multiple tracks, including the timeless hits “Only You (And You Alone),” “The Great Pretender,” “My Prayer,” “Twilight Time,” “Smoke Gets in Your Eyes” and “Harbor Lights.”