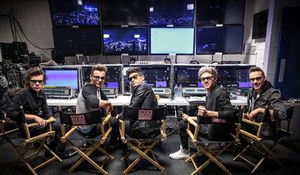 A look at hit pop group One Direction and its meteoric rise to fame, from humble hometown beginnings and competing on the “X-Factor” to conquering the world and performing at London’s famed O2 Arena. A captivating and intimate all-access look at life on the road for the global music phenomenon, interspersed with live concert footage. Available as a DVD, an Ultimate Fan Edition DVD/Blu-ray Combo, and an Ultimate Fan Edition DVD/Blu-ray/3D Blu-ray. Blu-ray extras: Extended cut with 20 minutes of new footage and four additional songs; three featurettes: “I Didn’t Do It” in which the boys try to complete on-air promotions at a Japanese radio station, “Hold That Pose” in which the boys visit the famed Madam Tussauds wax museum to experience their own sculptures being created; and “Up All Night!,” two mini movies previously only shown during the live concert; “Best Song Ever” music video; five “Going Home” featurettes in which each member of the group visits their home town, family and friends offering fans a glimpse at their life off the road; “Before the Show” featurette with the boys hanging out, playing games, exercising/training, and getting ready for one of their performances; “1D Family” featurette on the fans of One Direction; extended scenes. DVD extras: Select featurettes from the Ultimate Fan Edition. Vitals: Director: Morgan Spurlock. Stars: Niall, Zayn, Liam, Harry and Louis. 2013, CC, MPAA rating: PG, 92 min., Documentary, Box office gross: $28.818 million, Sony.