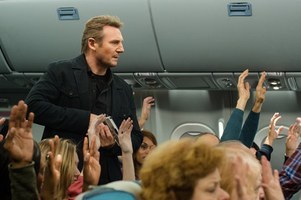 Liam Neeson has carved a niche for himself as a 21st century action hero — an intelligent father-husband who just happens to be a spy-hitman-cop who can fight off bad guys half his age (he turned 62 last week) and make it seem believable. And the man can act. Here he reunites with director Jaume Collet-Serra (“Orphan”) for the first time since their collaboration on the hit 2011 thriller “Unknown.” During a transatlantic flight from New York City to London, U.S. Air Marshal Bill Marks (Neeson) receives a series of cryptic text messages demanding that he instruct the airline to transfer $150 million into an off-shore account. Until he secures the money, a passenger on his flight will be killed every 20 minutes. Get ready for some surprising — and exciting — high altitude mystery and action — but also be prepared to suspend a little disbelief. Extras: “Suspense at 40,000 Feet” behind-the-scenes featurette. Blu-ray adds “Non-Stop Action” behind-the-scenes featurette on shooting in a 20′ by 30′ set the shape of a tube. Vitals: Director: Jaume Collet-Serra. Stars: Liam Neeson, Julianne Moore, Lupita Nyong’o, Michelle Dockery, Nate Parker, Scoot McNairy, Corey Stoll, Omar Metwally, Linus Roache, Jason Butler Harner, Shea Whigham, Anson Mount. 2014, CC, MPAA rating: PG-13, 107 min., Thriller, Box office gross: $89.454 million, Universal.

One Response to “Non-Stop”