“Acrimony.” For more information on other releases this week, see the Weekly Guide to Home Video Releases.

Given the paucity of new releases this month, it’s a pleasure to report on the many fine remastered, collectible and classic films due this week. In alphabetical order:

“The Addiction”: (1995) Philosophy student Kathleen (Lili Taylor) is dragged into an alleyway on her way home from class by Casanova (Annabella Sciorra) and bitten on the neck. She quickly falls ill but realizes this isn’t any ordinary 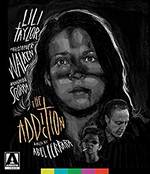 disease when she develops an aversion to daylight and a thirst for human blood. She now must learn to come to terms with her new lifestyle. Shot in stunning black and white on the streets of New York, “The Addiction” is a raw and shocking vampire film that only Abel Ferrara could make. New restoration from a 4K scan of the original camera negative by Arrow Films, approved by director Abel Ferrara and director of photography Ken Kelsch. Co-stars Christopher Walken, Edie Falco and Paul Calderon. On Blu-ray from Arrow Video/MVD Entertainment.

“The Banishment”: (2007 — Russia) Andrey Zvyagintsev (“Loveless,” “Leviathan”) proffers an ambitious exploration of the human condition in his second feature. Much like his critically acclaimed debut “The Return” (2003), the film investigates the bonds of family, this time tackling the relationship between a husband and wife. A trip to the pastoral countryside reveals a dark, sinister reality for a family from the city. Eschewing easy answers and tackling a wide array of themes, “The Banishment” poetically renders the persistent human state of exile from our surroundings. Based on the novel “The Laughing Matter” by William Saroyan. Stars Konstantin Lavronenko, Maria Bonnevie, Aleksandr Baluev. On DVD, Blu-ray, from Kino Lorber.

“Female Trouble”: (1974) Glamour has never been more grotesque than in “Female Trouble,” which injects the Hollywood melodrama with anarchic decadence. Divine, director John Waters’ larger-than-life muse, engulfs the screen with charisma as Dawn Davenport — who progresses from a teenage nightmare hell-bent on getting cha-cha heels for Christmas to a fame monster whose egomaniacal impulses land her in the electric chair — in the ultimate expression of the film’s lurid mantra, “Crime is beauty.” Shot in Baltimore on 16mm, with a cast drawn from Waters’ beloved troupe of regulars, the Dreamlanders (including Mink Stole, David Lochary, Mary Vivian Pearce, Edith Massey, and Cookie Mueller), this film, the director’s favorite of his work with Divine, comes to life through the tinsel-toned vision of production designer Vincent Peranio and costume designer/makeup artist Van Smith. An endlessly quotable fan favorite, “Female Trouble” offers up perverse pleasures that never fail to satisfy. On DVD and Blu-ray, with new 4K digital restoration, supervised by director John Waters, with uncompressed monaural soundtrack on the Blu-ray. From The Criterion Collection.

“The Martian Chronicles”: (1980) Making contact was the beginning of the end … From the mind of legendary writer Ray Bradbury springs what is perhaps his most epic vision. Capturing mankind’s first venture into the colonization of another planet — and its tragic first contact with another species — “The Martian Chronicles” is a stunning achievement that will take you from the edge of your seat and to the stars. Earth is on the verge of extinction. To survive, mankind must find another place to live. And when three expeditions to Mars, headed by Col. John Wilder (Rock Hudson), find suitable conditions for relocations, humans pour in by the shipload, bringing the old evils of Earth with them. As Wilder begins to heed the lessons of the dying Martian civilization, can he save humanity from repeating its own doom? The three-part miniseries has been fully remastered. Co-stars Gayle Hunnicutt, Bernie Casey, Darren McGavin, Roddy McDowall, Bernadette Peters, Joyce Van Patten, Fritz Weaver, Maria Schell, James Faulkner. On DVD, Blu-ray, from Kino Lorber Studio Classics.

“The Return”: (2003 — Russia) This is the stunning debut feature of Russian master Andrey Zvyagintsev (“Leviathan,” “Loveless”), which won the Golden Lion for Best Picture, as well as the Best First Film award, at the Venice Film Festival. Young brothers Andrei (Vladimir Garin) and Ivan (Ivan Dobronravov) have grown close in a household their father (Konstantin Lavronenko) abandoned. But when they least expect it, the man the boys have never known returns. Eager and bewildered, Andrei and Ivan join this mysterious stranger for a week-long fishing trip. As they travel deeper into the Russian wilderness, their journey devolves from vacation to boot 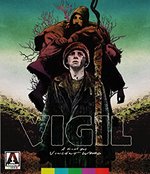 “Vigil”: (1984 — New Zealand) Vincent Ward — once described as “the Antipodean Werner Herzog” — made his feature debut with “Vigil,” heralding his status as one of New Zealand’s most distinctive filmmaking talents. An 11-year-old grow attempting to get over the death of her father is determined to protect her family from a mysterious stranger that she believes to be the Devil. This New Zealand classic was the first from the country to screen in competition at the Cannes Film Festival and the film’s young star, Fiona Kay, was rewarded with a standing ovation. On Blu-ray from Arrow Video/MVD Entertainment.

“The Virgin Spring”: (1960 — Sweden) Winner of the Academy Award for Best Foreign-language film, Ingmar Bergman’s “The Virgin Spring” is a harrowing tale of faith, revenge, and savagery in medieval Sweden. With austere simplicity, the director tells the story of the rape and murder of the virgin Karin, and her father Töre’s ruthless pursuit of vengeance, set in motion after the killers visit the family’s farmhouse. Starring frequent Bergman collaborator and screen icon Max von Sydow, the film is both beautiful and cruel in its depiction of a world teetering between paganism and Christianity. On DVD and Blu-ray, with new 2K digital restoration, with uncompressed monaural soundtrack on the Blu-ray. From The Criterion Collection.

“Black Lightning: The Complete First Season” (2017) is a two-disc set with all 13 one-hour episodes of the series about a crusading school principal who gets back into action as the original African-American electrical superhero. On DVD, Blu-ray, from Warner.

In “Spinning Man” (2018), starring Guy Pierce, Pierce Brosnan, Minnie Driver and Jamie Kennedy, when a 17-year-old girl goes missing, family man and distinguished college professor Evan Birch’s (Pearce) life is turned upside down as circumstantial evidence convinces gruff Detective Malloy (Brosnan) that Birch is a prime suspect. As Malloy begins to peel back the layers of Birch’s past indiscretions with female students, and Birch’s wife (Driver) begins to question his alibi, Birch’s life starts to unravel, and suddenly the questions that he faces aren’t merely academic — they’re a matter of life and death. On DVD, Blu-ray, from Lionsgate … 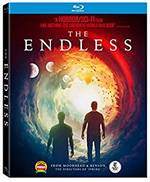 “The Endless” (2017), starring Aaron Moorhead, Justin Benson, Callie Hernandez, Emily Montague, Lew Temple, Tate Ellington and James Jordan, is a mind-bending supernatural thriller about two brothers who revisit the UFO death cult they escaped as teens, only to find there may have been truth to the cult’s otherworldly beliefs all along. On DVD, Blu-ray, from Well Go USA … In the dark heart of a sprawling, anonymous city, “Terminal” (2018), starring Margot Robbie, Simon Pegg, Mike Myers, Max Irons and Dexter Fletche, follows the twisting tales of two assassins carrying out a sinister mission, a teacher battling a fatal illness, an enigmatic janitor and a curious waitress leading a dangerous double life. Murderous consequences unravel in the dead of night as their lives all intertwine at the hands of a mysterious criminal mastermind hell-bent on revenge. On DVD, Blu-ray, from RLJE Films … Based on a true story, “China Salesman” (2017), starring Mike Tyson, Steven Seagal, Dong-Xue Li, Janicke Askevold, Li Ai and Eriq Ebouaney, tells of a dangerous adventure in Africa where a Chinese engineer/salesman comes face-to-face with a corrupt competitor over the contract for the first African mobile telecom technology. Local tribesman Kabbah (Tyson) and mercenary Lauder (Seagal) get drawn into the conflict in a classic, brutal hand-to-hand fight while the entire country faces civil war battles. On DVD, Blu-ray, from MVD Entertainment … “The Escape of Prisoner 614” (2018), starring Martin Starr, Jake McDorman, George Sample III and Ron Perlman, is an irreverent contemporary Western that stars Perlman as a corrupt and cold-blooded sherif opposite recently fired deputies played by Martin Starr and Jake McDorman, who purse an escaped convict to try to win back their badges. On DVD, Blu-ray,from Lionsgate … 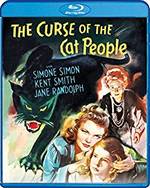 “The Curse of the Cat People” (1944) makes its Blu-ray debut this week. Filled with wonderful atmosphere and fine, moody fantasy, this continuation of 1942’s “Cat People” follows Oliver Reed (Kent Smith), now remarried, living in idyllic Tarrytown, New York, and the father of six-year-old Amy. When Amy becomes withdrawn and speaks of consorting with a new “friend,” Oliver worries that she may be under the influence of the spirit of first wife. Is it just Amy’s imagination that has manifested the enigmatic Irena (Simone Simon), who long believed herself to be descended from a race of Cat People? From Scream Factory … Lastly, there’s a pair of horror anthologies due from Artsploitation Films: “German Angst” (2017 — Germany), with German tales of love, sex and death in Berlin from that country’s most shocking directors. The anthology features three films — all of which focus on the dark, violent, and disturbing nature of love and sex were written and directed by three controversial underground filmmakers: the legendary Jorg Buttgereit (“Nekromantik” (1987), “The Death King” (1990); Andreas Marschall (“Tears of Kali” (2004); and Michal Kosakowski (“Zero Killed” (2014); and “A Taste of Phobia” (2017), a horror anthology in which 14 international directors delve into the terrifying truths and horrors of phobias. Read more about both titles.

“Turtle Tale “ (2015), with the voices of Mikey Bolts, Noah Schnacky, Tom Arnold, Ambyr Childers, Lydia Hull, Mary Rachel Dudle, is a family adventure awarded the Dove Seal of Approval that follows the adventures of sassy, outspoken box turtles Rafi and Hank and their friend, a gruff snapping turtle named Goliath. After vandals break into a nature park and kidnap Hank, it’s up to Rafi and Goliath to hit the trail in search of their missing friend. From Lionsgate.

During the longest siege a capital city has faced in the history of modern warfare, and amid the mortars and grenades, a heavy metal band agreed to play a concert. The documentary “Scream for Me Sarajevo” (2017) is the astonishing story of the most unlikely of rock concerts, performed by Bruce Dickinson and his band Skunkworks in 1994. Risking their lives, they were smuggled into the besieged city to play a concert for its citizens amidst the chaos of war. The film is far from a straight concert movie and provides an insight into a wider story of the people of Sarajevo taking drastic measures to endure the privations of war and pushing the boundaries to survive. It reflects a thriving underground arts community who were living their lives in the shadow of war and making music in the face of devastating loss, and the huge impact the concert had on the people of Sarajevo at a time when they thought they had been forgotten by the rest of the world. Formats: DVD, Blu-ray, VOD, Digital. (Eagle Vision). Due June 29.