“A Star Is Born,” “Can You Ever Forgive Me?” “Overlord” and “Robin Hood.” For more information on other releases this week, see the Weekly Guide to Home Video Releases.

Based on the classic novella by Thomas Mann, “Death in Venice” (1971), a late-career masterpiece from Luchino Visconti, is a meditation on the nature of art, the allure of beauty, and the inescapability of death. A fastidious composer reeling from a disastrous concert, Gustav von Aschenbach (Dirk Bogarde, in an exquisitely nuanced performance) travels to Venice to recover. There, he is struck by a vision of pure beauty in the form of a young boy named Tadzio (Björn Andrésen), his infatuation developing into an obsession even as rumors of a plague spread through the city. Setting Mann’s story of queer desire and bodily decay against the sublime music of Gustav Mahler, “Death in Venice” is one of cinema’s most exalted literary adaptations, as sensually rich as it is allegorically resonant. On DVD and Blu-ray, with new 4K digital restoration, with uncompressed monaural soundtrack on the Blu-ray. From The Criterion Collection … In “The Midnight Man” (1974), starring Burt Lancaster, Susan Clark, Cameron Mitchell, Robert Quarry, Ed Lauter, Catherine Bach, Harris Yulin, Lawrence Dobkin, Mills Watson and Charles Tyner, screen legend Burt Lancaster stars as Jim Slade, a former Chicago policeman who has just been released from prison for shooting his wife’s lover. He’s offered and takes a job as a campus night watchman at Jordon College. When a coed, the daughter of a prominent senator, is murdered and the local sheriff (Harris Yulin) tries to pin the crime on a creepy night janitor (Charles Tyner), Slade decides to start his own unauthorized investigation that takes the lid off the hornets’ nest. Lancaster and Roland Kibbee co-wrote, co-produced and co-directed this top-notch murder mystery. On DVD, Blu-ray, from Kino Lorber … 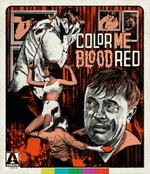 For the third and final instalment in his infamous “Blood Trilogy,” splatter movie pioneer Herschell Gordon Lewis turned to the world of fine art for “Color Me Blood Red” (1965), a tortured tale of a troubled artist turned homicidal maniac. Painter Adam Sorge has found himself in a bit of a creative lull. But when his girlfriend accidentally cuts her finger, he realizes what his work has been missing all this time — human blood. With pressure mounting from local gallery owner Farnsworth to deliver his next masterpiece, Adam sets about procuring as much glorious haemoglobin as he can muster — first from himself, and then from anyone unfortunate enough to pass by his sickening studio of slaughter. The final filmic collaboration between H.G. Lewis and producer/master exploiteer David F. Friedman, who collectively delivered the equally demented “”Blood Feast”” and “Two Thousand Maniacs!” On Blu-ray from Arrow Video/MVD Entertainment).

In “Backtrace” (2018), starring Ryan Guzman, Sylvester Stallone, Matthew Modine and Christopher McDonald, after suffering a brain injury from a bank heist gone wrong, Macdonald (Modine) develops amnesia and is put into a prison psychiatric ward. Following his seventh year of evaluation, he is coerced by an inmate (Guzman) and a ward doctor to break out of prison and is injected with a serum that forces him to relive the life he’s forgotten. Macdonald must now elude a local detective (Stallone), a tough FBI agent (McDonald), and the drug’s dangerous side effects in order to recover the stolen money, all while confronting his past. On DVD, Blu-ray, from Lionsgate … In “Iceman: The Time Traveler” (2018 — Hong Kong), starring Donnie Yen, Baoqiang Wang, Shengyi Huang, Kang Yu, Simon Yam and Yasuaki Kurata, a palace guard, Ying (Yen), is buried and frozen in time by an avalanche during a fierce battle during the Ming Dynasty. Brought back to life in the present day, Ying embarks on a quest for the only thing that can correct the wrongs of history — The Golden Wheel of Time. Ying sets out on his dangerous journey, never knowing every step he takes is leading him closer to a deadly trap. On DVD, Blu-ray/DVD Combo, from Well Go USA … In “Sgt. Will Gardner” (2019), starring Max Martini, Omari Hardwick, Lily Rabe, Dermot Mulroney and Robert Patrick, a forgotten Iraq war veteran with severe PTSD is trying to pick up the pieces of his life. After a series of set backs he decides to steal a motorcycle and embarks on a cross-country road trip to reunite with his wife and son. Along the way he tries to pick up the pieces of the life he lost since returning from combat, experiencing frequent flashbacks to the Iraq War and having conversations with his best friend and war buddy. On DVD, Blu-ray, from Cinedigm … 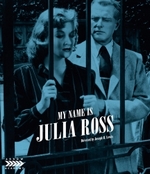 After a promising start on Poverty Row quickies, Joseph H. Lewis (“Gun Crazy”) made his first film at Columbia and established himself as a director to watch with “My Name Is Julia Ross” (1945), starring Nina Foch, May Whitty, George Macready, a Gothic-tinged Hitchcockian breakout hit, which later proved so popular that Columbia promoted it to A-feature status. The morning after Julia Ross (Foch) takes a job in London as secretary to wealthy widow Mrs. Williamson Hughes (Whitty), she wakes up in a windswept Cornish mansion, having been drugged. Mrs. Hughes and her volatile son, Ralph (Macready), attempt to gaslight Julia into believing she is Ralph’s wife, Marion. Her belongings have been destroyed, the windows barred and the locals believe that she is mad. Will Julia be able to escape before she falls prey to the Hughes’ sinister charade? And what happened to the real Marion Hughes? A briskly paced and brilliantly stylized mystery. On Blu-ray from Arrow Academy/MVD Entertainment … “So Dark the Night” (1946), also from Lewis, and starring Steven Geray, Micheline Cheirel, Eugene Borden, is a Hitchcockian tale of mystery and intrigue. Inspector Cassin, a renowned Paris detective, departs to the country for a much-needed break. There he falls in love with the innkeeper’s daughter, Nanette, who is already betrothed to a local farmer. On the evening of their engagement party, Nanette and the farmer both disappear. Cassin takes up the case immediately to discover what happened to them and who is responsible. Lewis elevates the twisty, pulpy material with some of the finest noir touches the genre has to offer, beautifully shot by Oscar-winning cinematographer Burnett Guffey (“Bonnie and Clyde”). On Blu-ray from Arrow Academy/MVD Entertainment … 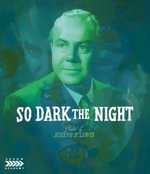 “Backbeat” (1993), an energetic musical drama chronicling the pre-fame Beatles as they head to Hamburg in search of success, makes its Blu-ray debut this week. As they gain popularity, the “fifth Beatle,” bass guitarist Stuart Sutcliffe (Stephen Dorff), falls in love and ultimately must choose between his best friend John Lennon (Ian Hart), his new love Astrid Kirchherr (Sheryl Lee), and what will become the greatest band in the world. From Shout! Factory Select … also making its Blu-ray debut this week is “The Return of the Vampire” (1943), starring Bela Lugosi, Frieda Inescort, Nina Foch and Miles Manders. In 1918, Armand Tesla (Lugosi), a 200-year-old Hungarian Vampire, prowls the English countryside, feeding from the jugulars of the villagers. But Tesla’s reign of terror is interrupted when a pair of scientists, Lady Jane and Sir John Ainsley, drive a railroad spike through his heart. The “un-dead” Tesla remains safely entombed for two decades until the impact from a stray Nazi bomb accidentally releases him. Along with his werewolf servant Andreas Obry, the resurrected vampire now plots vengeance on the family that put a halt to his nocturnal feasting. From Scream Factory … In “Desert Fury” (1947), starring Lizabeth Scott, Burt Lancaster, John Hodiak, Wendell Corey and Mary Astor, Eddie Bendix (Hodiak) and his henchman, Johnny Ryan (Corey), two gangsters in the gambling trade, return to a small desert town outside of Reno. Years ago, Eddie had left town under suspicion of murdering his wife and after running into some trouble in Las Vegas, Eddie now hopes to get involved with the local gambling house whose proprietor is his ex-flame Fritzi Haller (Astor). To complicate matters, Eddie falls for Fritzi’s daughter (Scott), who used to be involved with the local lawman Tom Hanson (Lancaster), who’s still in love with her. Lewis Allen directed this classic film noir in Technicolor; it was adapted for the screen by filmmaker Robert Rossen from the far racier and more explicit novel by Ramona Stewart. On DVD, Blu-ray, from Kino Lorber.

“The Last Race” (2018) is an intimate portrait of a small-town stock car racetrack — the Riverhead Raceway on Long island, NY — and the tribe of passionate blue-collar drivers that call it home, struggling to hold onto an American racing tradition as real estate development threatens its survival. Michael Dweck’s stirring imagery takes you inside the world of grassroots racing 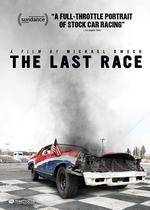 and eye to eye with the cars’ snarling grills and white roll bars that protrude like bones out of scarred metal. The racetrack is tied to a deep sense of identity in its community, but it’s on the only piece of undeveloped land in the area — worth millions — and the only thing keeping the bulldozers at bay is track owners Barbara and Jim Cromarty’s love of the track and its community. From Magnolia Home Entertainment … “American Masters: Sammy Davis, Jr.: I’ve Gotta Be Me” (2019) is the first major film documentary to examine the performer’s vast career and his journey for identity through the shifting tides of civil rights and racial progress during 20th-century America. Sammy Davis, Jr. had the kind of career that was indisputably legendary, vast in scope and scale. And yet, his life was complex, complicated and contradictory. Davis strove to achieve the American Dream in a time of racial prejudice and shifting political territory. He was a veteran of increasingly outdated show business traditions and worked tirelessly to stay relevant, even as he frequently found himself bracketed by the bigotry of white America and the distaste of black America. Davis was the most public black figure to embrace Judaism, thereby yoking his identity to that of another persecuted minority. In Duke Ellington’s words, he was “beyond category.” Features interviews with Billy Crystal, Norman Lear, Jerry Lewis, Whoopi Goldberg and Kim Novak. From PBS Distribution) … 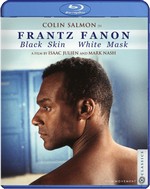 “Frantz Fanon: Black Skin, White Mask” (1995) is an innovative film biography that explores the preeminent theorist of the 20th century anti-colonial movement, a man whom Jean-Paul Sartre recognized as the figure “through whose voice the Third World finds and speaks for itself.” Starring British actor Colin Salmon, the film undertakes an intellectual and poetic exploration of Fanon’s life, influence and legacy, weaving together interviews with family members and friends, documentary footage, readings from Fanon’s work and dramatizations of crucial moments in the theorist’s life. And, cultural critics Stuart Hall and Françoise Verges position Fanon’s work in his own time and draw out its implications for our own, restoring the theorist to his rightful place at the center of contemporary discussions around post-colonial identity. From his early years in Martinique (then a colony of France) to his professional life as a psychiatric doctor and revolutionary in Algeria during the bloody war of independence with France, the brief, though remarkable life of Fanon, the influential author of “Black Skin, White Masks” and “The Wretched of the Earth,” comes to rich life in this film being released to Blu-ray for the very first time in North American featuring a new 2K digital restoration. On DVD, Blu-ray, from Film Movement.