“Trumbo,” “Steve Jobs,” “The 33” and Black Mass” For more information on other releases this week, see the Weekly Guide to Home Video Releases.

There’s two outstanding releases this week from The Criterion Collection:
Genius provocateur Nagisa Oshima (“In the Realm of the Senses”), an influential figure in the Japanese New Wave of the 1960s, made one of his most startling political statements with his compelling pitch-black satire “Death By Hanging” (1968). In this macabre farce, a 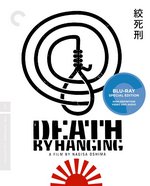 Korean man is sentenced to death in Japan but survives his execution, sending the authorities into a panic about what to do next. At once disturbing and oddly amusing, Oshima’s constantly surprising film is a subversive and surreal indictment of capital punishment, religion and the treatment of Korean immigrants in his country. New, restored 4K digital transfer, with uncompressed monaural soundtrack on the Blu-ray … Charlie Chaplin was already an international star when he decided to break out of the short-film format and make his first full-length feature. “The Kid” (1921) doesn’t merely show Chaplin at a turning point, when he proved that he was a serious film director — it remains an expressive masterwork of silent cinema. In it, he stars as his lovable Tramp character, this time raising an orphan (a remarkable young Jackie Coogan) he has rescued from the streets. Chaplin and Coogan make a miraculous pair in this nimble marriage of sentiment and slapstick, a film that is, as its opening title card states, “a picture with a smile — and perhaps, a tear.” New 4K digital restoration of Charlie Chaplin’s 1972 re-release version of the film, featuring an original score by Chaplin, with uncompressed monaural soundtrack on the Blu-ray.

In “The Brady Kids: The Complete Animated Series” (1972-73), the members of the original Brady Bunch cast returned to voice their iconic roles for 22 episodes of this animated series. When the six Brady kids befriend a magical bird and two panda cubs, their adventures become more amazing than ever: they travel to ancient Greece, blast off for an out-of-this-world trip and help thwart a bank robbery.Three-disc DVD from Shout! Factory … “Girls: The Complete Fourth Season” (2015) is a two-disc set with all 10 episodes of the series that follows the misadventures of a group of twenty-something friends in and out 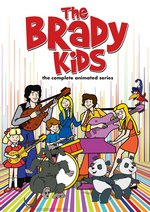 of NYC. This season finds the girls tentatively edging towards maturity as they take on new personas in new worlds. As the season begins, Hannah (Lena Dunham) leaves New York to attend the prestigious Iowa Writers’ Workshop in the hopes of becoming a more serious writer, while confronting uncertainty in her relationship with Adam (Adam Driver). Meanwhile, back in New York, Marnie (Allison Williams) pursues a music career while balancing her professional and romantic relationship with Desi (Ebon Moss-Bachrach); Shoshanna (Zosia Mamet) graduates and begins interviewing for jobs, while sorting out her relationship with Ray (Alex Karpovsky); and Jessa (Jemima Kirke) is trying out sobriety through AA, though her ability to stir up drama remains undiminished. On DVD, Blu-ray from HBO … “Togetherness: The Complete First Season” (2015) is a two-disc set with all eight-episodes of the series that follows four adults living under one roof struggling to keep their relationships and dreams alive as they approach the age of forty. 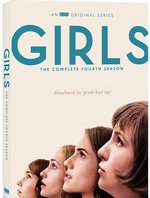 Created by Jay Duplass & Mark Duplass. In the series, Brett (Mark Duplass) is a straitlaced sound designer trying to rediscover himself while his wife Michelle (Melanie Lynskey) is eager to rekindle her passion for romance and life. Their lives are shaken up with the arrival of Michelle’s sister Tina (Amanda Peet), who comes to stay with them as she desperately tries to find a husband and get her bouncy-castle business off the ground, and Brett’s best friend Alex (Steve Zissis), who decides to give his stalled acting career one last try. Blending laughter and pathos, “Togetherness” shows the tragically comedic struggle to follow personal dreams while still remaining good friends, siblings, and spouses to each other. On DVD, Blu-ray from HBO … In the three-part miniseries “The Trials Of Jimmy Rose” (2015), Ray Winstone plays Jimmy Rose, a career criminal newly free after 12 years in prison. Greeted with cold disdain from his wife, Jacki, Jimmy decides to stick to the terms of his parole: hold down a job and stay right in the eyes of the law. But when he finds out that his beloved granddaughter is in trouble, Jimmy will go to extraordinary lengths for his family. From Acorn Media.

Arrow Films via MVD Entertainment has two cult films from 1985 on hand this week, both in dual format Blu-ray/DVD editions. Although the slasher film was in decline by the mid-1980s, there were still some grisly delights to be had… and they don’t come much grislier than writer-director Buddy Cooper’s sickening stalk-and-slash classic “The Mutilator.” When Ed receives a message from his father asking 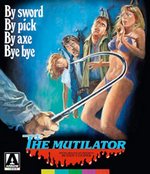 him to go and lock up the family’s beach condo for the winter, it seems like the perfect excuse for an alcohol-fuelled few days away with his friends. After all, his dad has forgiven him for accidentally blowing mom away with a shotgun several years ago … hasn’t he? But no sooner are the teens on the island than they find themselves stalked by a figure with an axe (and a hook, and an onboard motor) to grind. Originally entitled “Fall Break” (watch out for the incongruous theme song of the same name), “The Mutilator” has earned a reputation amongst horror fans as one of the “holy grails” of 80s splatter mayhem due to its highly inventive (and not to say, decidedly gruesome) kill sequences, courtesy of FX wizard Mark Shostrom (“Videodrome”, “Evil Dead II”). In a new 2K restoration from original vault materials of the R-rated and Unrated versions of the film, with original mono audio (uncompressed PCM on the Blu-ray) … In “Pray for Death,” martial arts legend Sho Kosugi stars as a family man driven to exact vigilante justice — 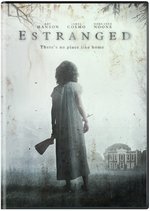 ninja style. Akira (Kosugi) has brought his wife and two boys to the United States in search of a better life. But their slice of the American Dream is quickly soured when they fall foul of a group of jewelry thieves. Unfortunately for the bad guys, they didn’t count on Akira being a secret black ninja. New digital transfers of the Unrated and R-rated versions with original uncompressed PCM Stereo 2.0 audio. Co-stars James Booth, Donna Kai Benz … In “Criminal Activities” (2015), starring John Travolta, Michael Pitt, Dan Stevens, Christopher Abbott, Rob Brown, Edi Gathegi and Jackie Earle Haley, four friends stumble into a deal too good to refuse, but when their investment goes bad, they learn that part of their funding came from a notoriously ruthless crime boss … and it’s payback time. Now they must successfully kidnap a family member of a rival kingpin in order to erase the life-threatening debt. On DVD, Blu-ray Disc from RLJ Entertainment … In the dysfunctional family thriller, January (Amy Manson) has a terrible accident after years of partying abroad, and she’ confined to a wheelchair … but with no memory of her past, her family, or the stately manor that was once her home. But something isn’t right. They say she ran away, but won’t tell her why. Her sister wishes she’d never come home. They’re locking her in at night. And the way her brother looks at her … Co-stars James Cosm, Craig Conway, James Lance, Eileen Nicholas. On DVD, Blu-ray Disc from Well Go USA.

“Labyrinth of Lies” (2014 — Germany) exposes the post-war conspiracy of prominent German institutions and government branches to cover up the crimes of Nazis during World War II. Germany 1958. In those years, “Auschwitz” was a word that some people had never heard of, and others wanted to forget as 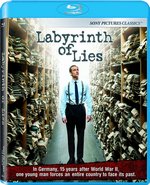 quickly as possible. Against the will of his immediate superior, young prosecutor Johann Radmann (Alexander Fehling) begins to examine the case of a recently identified teacher who was a former Auschwitz guard. Radmann soon lands in a web of repression and denial, but also of idealization. He devotes himself with utmost commitment to his new task and is resolved to find out what really happened. He oversteps boundaries, falls out with friends, colleagues and allies, and is sucked deeper and deeper into a labyrinth of lies and guilt in his search for the truth. But what he ultimately brings to light will change the country forever. Germany’s Academy Award entry for Best Foreign-language Film. On DVD, Blu-ray Disc from Sony. 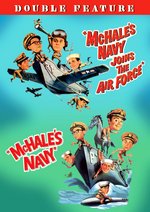 the hapless Ensign Parker (Tim Conway) in a case of mistaken identity when he switches uniforms with a pilot … and the Air Force gains an airhead. From Shout! Factory … “Hatched” (2016) is an animated family comedy with the voices of Jeff Foxworthy, Sean Astin. Young chicks Cluck, Chickpea and Tiny SchwarzHENegger are determined to show everyone that chickens really can fly, but when their tiny alien pal, Magic, is in danger, the feathered trio will join the efforts of their animal neighbors to save their home and their friend from the “fowlest” of villains. $14.93 from Cinedigm … “Wiener Dog Internationals” (2015), with the voices of Morgan Fairchild, Bryan Batt and Jason London, is a Dove Foundation-approved animated family adventure about Shelly, the U.S. wiener dog racing champion. The Jack family is at it again, as they enter the International World of Wiener Dog Racing. The kids sneak away to enter Shelly in the Internationals, and find themselves caught in a devious plot hatched by Miss Merryweather that may change wiener dog races forever. From Lionsgate.

This year marks the 50th anniversary of the founding of the Black Panther Party … and the group and its leadership remain powerful and enduring images in our popular imagination. The documentary “The Black Panthers: Vanguard of the Revolution” (2015) weaves together the voices of those involved with the Panthers: police informants, journalists, white supporters and detractors, those who remained loyal to the party, and those who left it. Features firsthand accounts from participants, including Kathleen Cleaver, the first communications secretary of the Black Panther Party, Elaine Brown, former Black Panther Party chairman (1974-1977), Emory Douglas, the Black Panther party’s minister of culture and chief art director for the party s newspaper, and others. On DVD, Blu-ray Disc from PBS Distribution … Filmed over three years on China’s railways, J. P. Sniadecki’s masterful documentary “The Iron Ministry” (2014) traces the vast interiors of a country on the move: flesh and metal, clangs and squeals, light and dark, language and gesture. Scores of rail journeys come together into one, capturing the thrills and anxieties of social and technological transformation. “The Iron Ministry” immerses audiences in fleeting relationships and uneasy encounters between humans and machines on what will soon be the world’s largest railway network. In Mandarin with English subtitles.From Icarus Films.