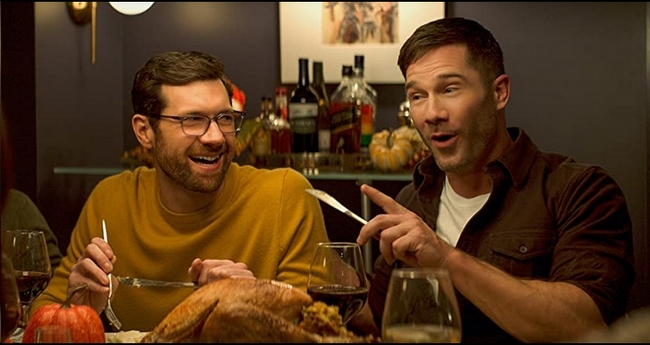 (2022) The first romantic comedy from a major American studio about two gay men stumbling towards love. Bobby is a neurotic podcast host who’s happy to go on Tinder dates and content not to have a serious relationship. That all changes when he meets Aaron, an equally detached lawyer who likes to play the field. Repeatedly drawn to each other, both men begin to show their vulnerable sides as their undeniable attraction turns into something resembling a commitment. It’s also the first studio film featuring an all-LGBTQ+ cast in both queer and straight roles, and its creator, Billy Eichner, is the first openly gay man to write and star in his own studio film. Vitals: Director: Nicholas Stoller. Stars: Billy Eichner, Luke Macfarlane, Ts Madison, Monica Raymund, Guillermo Diaz, Guy Branum, Amanda Bearse. 2022, CC, MPAA rating: R, 116 min., Comedy, North American box office gross: $11.452, million, worldwide $11.452, million, Universal. Formats: DVD, Blu-ray/DVD Combo + Digital Code, VOD, Digital. Extras: Deleted scenes; gag reel; “Representation Matters”; “From Start to Finish” behind-the-scenes featurette; “Introducing Bobby and Aaron”; “The Cast and the Cameos”; “The Art of the Rom-Com with Billy and Nick”; “The BROS National LGBTQIA+ History Museum.” Read more here

One of the most electrifying heroes of the 20th century receives an appropriately sweeping screen biopic, rich in both historical insight and propulsive cinematic style, courtesy of visionary director Spike Lee. Built around an extraordinary performance from Denzel Washington, “Malcolm X” (1992) draws on the iconic civil rights leader’s autobiography to trace his journey of empowerment, from a childhood riven by white-supremacist violence to a life of petty crime to his conversion to Islam and rebirth as a fearless fighter for Black liberation, whose courage and eloquence inspired oppressed communities the world over. An epic of impeccable craft that was made with Lee’s closest creative collaborators and is buoyed by commanding performances from Delroy Lindo, Angela Bassett, Al Freeman Jr., and others, this is a passionate monument to a man whose life continues to serve as a model of principled resistance. On Blu-ray, 4K Ultra HD/Blu-ray combo, with new 4K digital restoration, supervised by cinematographer Ernest Dickerson, with 5.1 surround DTS-HD Master Audio soundtrack. For the 4K UHD edition: One 4K UHD disc of the film presented in Dolby Vision HDR and two Blu-rays with the film and special features. Read more here. From The Criterion Collection.

In “Contraband” (1980 — Italy), when an idealistic cigarette smuggler in Naples, Italy, Luca, runs into problems when a sadistic drug dealing gangster from France decides to muscle his way into operations, he tries to wipe out the competition … and all hell breaks loose and the bodies start piling up. Luca joins forces with rival smugglers and the local mafia to counteract the power play, which only increases the body count until the explosive gun powder and gut bursting conclusion. Directed by Lucio Fulci (“The Beyond”), Contraband stars Fabio Testi, Marcel Bozzuffi), Ivana Monti and Saverio Marconi. Featuring gruesome practical special effects by Germano Natali and Roberto Pace, with music by legendary composer Fabio Frizzi, “Contraband” is a hard hitting mafia story filmed through the eye of an unrelenting horror master – you have been warned. “Contraband” makes its worldwide Blu-ray. 4K restoration from the negative. From Cauldron Films … In “Murder in a Blue World” (1973 — Spain), in a violent, dystopian consumer-fed future, David (Chris Mitchum) blackmails nurse Ana (Sue Lyon) after witnessing her commit a murder. When Ana and Victor (Jean Sorel) discover David is a known gang member with an extensive criminal past, they make a plan to turn the tables and use him for their own clandestine purposes. In 1971 Stanley Kubrick changed dystopian cinema forever with “A Clockwork Orange.” Two years later, transgressive Spanish genre director Eloy de la Iglesia unleashed this thought provoking and beautifully shot future-world that was also known as “A Clockwork Terror.” Now available for the first time on Blu-ray. 2K restoration of the Spanish producer’s cut from the negative. English and Spanish audio. From Cauldron Films … In “Ski Patrol” (1990), the lease on the Snowy Peaks Lodge, a popular ski resort, is up for renewal and its owner Pops (Ray Walston) has no worries about signing a new lease. Despite his Ski Patrol, an out-of-control group of skiers led by Jerry (Roger Rose) and Iceman (T.K. Carter), the resort has an impeccable safety record. However, a devious land developer (Martin Mull) has other plans in mind for the resort and hires the talents of a young blonde named Lance (Corby Timbrook) to undermine the Ski Patrol’s efforts to keep the slopes safe. Featuring extraordinary aerial stunts, impressive snowboarding with an incredible downhill showdown. On Blu-ray from MVD Rewind … “5-25-77” (2022), starring John Francis Daley, Austin Pendleton, Colleen Camp and Neil Flynn, is the true life comedy about the very first fan of the movie that changed everything: “Star Wars.” Writer-Director and visual effects artist Patrick Read Johnson recounts how he became the first outsider to see the almost-finished cut of “Star Wars,” and how this event changed his life. The story is set in the spring of 1977, in the tiny town of Wadsworth, IL., where Pat is a sci-fi obsessed teenager making increasingly ambitious 8mm films in the hopes of heading for Hollywood one day. As he tries (and fails) to balance running his “studio” with chasing the girl of his dreams, Linda, a courageous phone call, placed by his concerned mother, results in Pat taking “the ultimate trip” to Hollywood, meeting a couple of industry titans, and getting an early look at an upcoming sci-fi film, unlike any he’s ever seen before. Now, Pat is forced to choose – between chasing a seemingly impossible dream — or accepting the comforting familiarity of home. On DVD, Blu-ray, from MVD Visual. Fabian in the title role along with a sinister Klaus Kinski and lovely Dayle Haddon, “Madame Claude” is an incredibly timeless look at one of the most controversial figures in recent French history. Originally released as “The French Woman” in the United States, the film is a mesmerizing mixture of elegant eroticism and potent political thriller powered by Jaeckin’s inventive direction and an unforgettable score by legendary French composer Serge Gainsbourg. 2-disc limited edition with CD soundtrack by Serge Gainsbourg. New 4K HD Transfer (from original 35mm negative). On Blu-ray from Cult Epics … In “Unidentified” (2021 — Romania), despite growing debts and a complicated personal life, police detective Florin Iespas is determined to solve a hard case that no one else seems to care about in his small city in Northern Romania. Ordered to put down the file, the cop continues his off-the-record investigations, soon turning up a strong lead for two hotel fires that resulted in several deaths. The suspect is Banel, a security guard of Roma descent, but he denies everything. Faced with the refusal of the police chief to support his inquiry, the mistrust of his colleagues, and his own inner demons, Florin resorts to extraordinary measures to achieve a form of justice. Under the surface of a sharp, tightly woven mystery, the film is a seething neo-noir touching on police corruption, prejudice, and toxic masculinity. Formats: DVD, Digital. From Film Movement.

“The Book Keepers” (2021) follows the uplifting journey of a husband who keeps his wife’s dream alive by becoming the spokesperson for her book after her death. Carol Wall’s debut memoir – about cancer, friendship, and cultivating an open heart – was a breakout success. But joy turned to tragedy when the breast cancer she wrote about returned, and she died months after its publication. Carol’s husband, Dick, determined to help her life-affirming message find its audience, becomes the book’s unlikely spokesperson and embarks on a nationwide book tour. He’s joined by the couple’s filmmaker son, Phil, who captures his dad’s efforts to ensure her dream lives on. The result is an intimate portrait of love and loss – an ode to the healing power of storytelling. From First Run Features. Read more here.