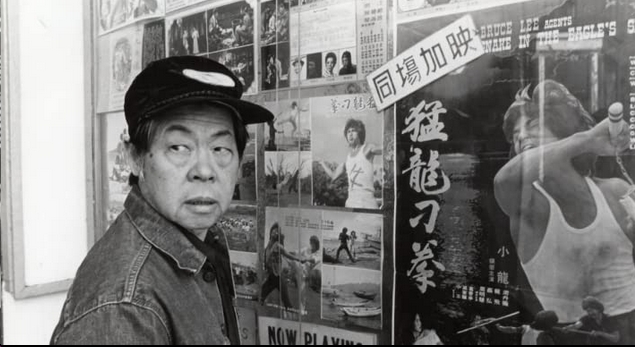 A mystery man, a murder, and a wad of missing cash — in his wryly offbeat breakthrough “Chan Is Missing” (1982), Wayne Wang updates the ingredients of classic film noir for the streets of contemporary San Francisco’s Chinatown. When their business partner disappears with the money they had planned to use for a cab license, driver Jo (Wood Moy) and his nephew Steve (Marc Hayashi) scour the city’s back alleys, waterfronts, and Chinese restaurants to track him down. But what begins as a search for a missing man gradually turns into a far deeper and more elusive investigation into the complexities and contradictions of Chinese American identity. The first feature by an Asian American filmmaker to play widely and get mainstream critical appreciation, “Chan Is Missing” is a continuously fresh and surprising landmark of indie invention that playfully flips decades of cinematic stereotypes on their heads. In English, Cantonese, and Mandarin with English subtitles. In a Blu-ray debut, with high-definition digital master, approved by director Wayne Wang, with uncompressed monaural soundtrack. From The Criterion Collection. Read more here … Has dialogue ever been more perfectly hard-boiled? Has a femme fatale ever been as deliciously evil as Barbara Stanwyck? And has 1940s Los Angeles ever looked so seductively sordid? Working with co-writer Raymond Chandler, director Billy Wilder launched himself onto the Hollywood A-list with this paragon of film-noir fatalism, “Double Indemnity” (1944), from James M. Cain’s pulp novel. When slick salesman Walter Neff (Fred MacMurray) walks into the swank home of dissatisfied housewife Phyllis Dietrichson (Stanwyck), he intends to sell her insurance, but he winds up becoming entangled with her in a far more sinister way. Featuring scene-stealing supporting work from Edward G. Robinson and the chiaroscuro of cinematographer John F. Seitz, “Double Indemnity” is one of the most wickedly perverse stories ever told and the cynical standard by which all noir must be measured. On Blu-ray, 4K UHD + Blu-ray combo, with new 4K digital restoration, with uncompressed monaural soundtrack. In the 4K UHD edition: One 4K UHD disc of the film presented in Dolby Vision HDR and two Blu-rays with the film and special features. From The Criterion Collection. Read more here.

Suspecting that people are transforming into malevolent shape-shifters, Wyatt flees to New York City to seek out his estranged childhood friend Christian in “They Look Like People” (2015), starring MacLeod Andrews, Evan Dumouchel and Margaret Ying Drake. As the mysterious horrors close in on Wyatt, he questions whether to protect his only friend from an impending war, or from himself. A genre-bending story of love, loyalty and living nightmares. A critical and festival darling upon its initial release in 2015, Perry Blackshear’s feature debut, which he wrote and directed, world premiered at the 21st Slamdance Film Festival and was instantly hailed for its masterful handling of a sparse production and highly effective emotional and terror beats. On DVD, Blu-ray from Yellow Veil Pictures.

In “Row 19” (2021 — Russia), starring Svetlana Ivanova and Wolfgang Cerny, a young doctor and her daughter are on an overnight flight when several passengers on the half-empty plane suddenly suffer gruesome, inexplicable deaths. The woman begins to suspect that the shadowy, terrifying force behind her own worst childhood nightmare may be back for blood. In subtitled and English-dubbed versions, on DVD and Blu-ray, from Well Go USA … Based on a popular Japanese picture book by celebrated author and creator Akihiro Nishino, the fantastical tale of Lubicchi and Poupelle leaps from pages to the screen in “Poupelle of Chimney Town” (2020 — Japan). The story of young Lubicchi living among the thick smoke from the chimneys of his isolated town, yearning to see the “stars” — to know the truth — his father always told him about. One Halloween night he meets Poupelle, a man made of garbage, and together they look to the sky as their adventure begins. Spectacularly beautiful, filled with inspiring performances and splendid music and sound effects, “Poupelle of Chimney Town” brings laughter, tears, and joy. English audio and Japanese audio with English subtitles. On Blu-ray/DVD Combo, from Eleven Arts/Shout! Factory. Read more here.

“Agatha Raisin: Series 4” (2021) is a three-disc set with all eight episodes. Ashley Jensen is back as formidable and fashionable PI Agatha Raisin in Series 4 of this comic mystery series based on the books by MC Beaton. From Acorn Media … “The Boys Season 1 and 2” (2019-20) is a six-disc set with all 16 episodes. “The Boys” is an irreverent take on what happens when superheroes — as popular as celebrities, as influential as politicians, and as revered as gods — abuse their superpowers rather than use them for good. On DVD, Blu-ray from Sony.