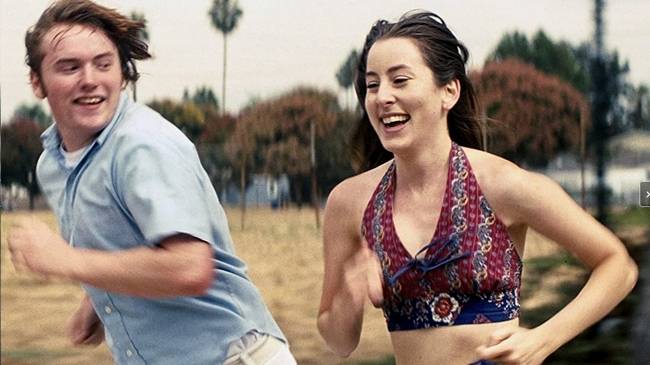 Laurence Olivier once observed that he “learned more about acting from watching [Spencer] Tracy than in any other way.” Undertaking the dual title role in Robert Louis Stevenson’s Victorian science-fiction thriller “Dr. Jekyll & Mr. Hyde” (1941), Tracy fulfilled that compliment by abandoning his characteristic down-to-earth image for the most terrifying portrayal of his career. Also cast “against type” are “Sweater Sweetheart” Lana Turner as Jekyll’s fiancée and Ingrid Bergman, who plays Hyde’s victimized Cockney mistress. Tracy and director Victor Fleming (“Gone with the Wind”) decided to break with convention by interpreting Hyde from a Freudian perspective instead of portraying him as the usual physically grotesque monster, and he emerges as a menacing distortion of the sexually frustrated Jekyll. To Tracy fans, this amazing piece of virtuosity will come as an unforgettable revelation. In a Blu-ray debut from Warner Archive … It’s death, Japanese style, in the rollicking and wistful “The Funeral” (1984 — Japan), the first feature from maverick writer-director Juzo Itami. In the wake of her father’s sudden passing, a successful actor (Itami’s wife and frequent collaborator, Nobuko Miyamoto) and her lascivious husband (Tsutomu Yamazaki) leave Tokyo and return to her family home to oversee a traditional funeral. Over the course of three days of mourning that bring illicit escapades in the woods, a surprisingly materialistic priest (Chishu Ryu), and cinema’s most epic sandwich handoff, the tensions between public propriety and private hypocrisy are laid bare. Deftly weaving dark comedy with poignant family drama, “The Funeral” is a fearless satire of the clash between the old and new in Japanese society in which nothing, not even the finality of death, is off-limits. On DVD, Blu-ray, with high-definition restoration, with uncompressed monaural soundtrack on the Blu-ray from The Criterion Collection. Read more here.

In “Slasher: Flesh & Blood” (2021), starring David Cronenberg, Rachael Crawford, Sabrina Grdevich, Sydney Ozerov-Meyer and Alex Ozerov-Meyer, a wealthy, dysfunctional family gathers for a reunion on a secluded island, and soon discover they’ll be pitted against one another in a cruel game of life and death, all while being stalked by a mysterious masked killer. Nothing is what it seems, and no one is safe as the tension – and body count – ratchets up. On DVD, Blu-ray, from RLJE Films … In “Infinite” (2022) directed by Antoine Fuqua and starring Mark Wahlberg, Chiwetel Ejiofor, Sophie Cookson, Jason Mantzoukas, Rupert Friend, Liz Carr, Toby Jones and Dylan O’Brien, skills he has never learned and memories of places he has never visited haunt the daily life of Evan McCauley (Wahlberg). Self-medicated and on the brink of a mental breakdown, he is rescued by a secret group that call themselves “Infinites”; they reveal to him that his memories are real – but they are from multiple past lives. The Infinites bring Evan into their extraordinary world, where a gifted few are given the ability to be reborn with their memories and knowledge accumulated over centuries. With critical secrets buried in his past, Evan must work with the Infinites to unlock the answers in his memories in a race against time to save humanity from one of their own (Ejiofor) who seeks to destroy it. On DVD, Blu-ray, from Paramount. Read more here … Mercenaries with nothing to lose are hired to rescue a bioengineer imprisoned in a cold war bunker in “Death Valley” (2021), starring Jeremy Ninaber, Ethan Mitchell and Kristen Kaster. Upon entering the ominous facility, they find themselves in a fight for their lives, under attack from an unknown and deadly creature. On DVD, Blu-ray, from RLJE Films … 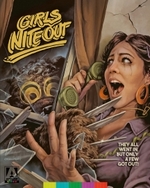 A host of familiar genre faces including Hal Holbrook (“Creepshow”), Rutanya Alda (“Amityville II: The Possession”), Julia Montgomery (“The Kindred”) and Lauren-Marie Taylor (“Friday the 13th Part 2”) rounds out the cast of “Girls Nite Out” (1982), a gloriously mean-spirited slice from the slasher golden age. The students of DeWitt University are preparing themselves for a night of fun and frolics in the form of an all-night scavenger hunt. Little do they know that they are in fact the ones being hunted. An unhinged assailant, disguised in the college’s goofy bear mascot outfit – and bearing knives for claws, two years before Freddy donned his famous gloves – is stalking the campus hellbent on carving up co-eds. Originally released under the only marginally more appropriate title of “The Scaremaker,” “Girls Nite Out” is a decidedly singular slasher flick which comes on like a frenetic cross between “Animal House” and “Friday the 13th” – veering from jovial frat antics to jarringly disturbing scenes of the killer shrieking obscenities as he slices up his victims. New 2K restoration from 35mm vault elements. On Blu-ray from Arrow Video/MVD Entertainment. Read more here … In “Two Men In Town” (2014), starring Forest Whitaker, Harvey Keitel, Brenda Blethyn, Luis Guzman, Ellen Burstyn and Dolores Heredia, Whitaker plays William Garnett, an ex-con starting life over as a recently converted Muslim. With the help of his determined parole officer (Brenda Blethyn), he gets a job, meets an interesting woman, and keeps his head down. But the town sheriff, Bill Agati (Harvey Keitel), can’t leave him alone since Garnett was responsible for killing his deputy. As Agati puts pressure on him, and his old partners in crime hassle him, Garnett slowly starts to unravel. When his former life catches up with him, Garnett has to make peace with his past and face the future head on, with a gun. In a Blu-ray debut from Cohen Media Group.

In “Sundown” (2022), starring Tim Roth, Charlotte Gainsbourg, Samuel Bottomley and Monica Del Carmen, Neil and Alice Bennett (Roth, Gainsbourg) are the core of a wealthy family on vacation in Mexico with younger members Colin and Alexa until a distant emergency cuts their trip short. When one relative disrupts the family’s tight-knit order, simmering tensions rise to the fore in this suspenseful jolt from writer-director Michel Franco. On DVD, Blu-ray, from Bleecker Street/Decal Releasing.

In the compelling documentary “Straight to VHS” (2021 — Uruguay), director Emilio Silva Torres tries to track down the people responsible for “Act of Violence In a Young Journalist,” Uruguay’s first direct-to-video thriller. A bizarre 1980s oddity, that film combines the ineptitude of Ed Wood or “The Room” with surprising insights into media, violence, and human relationships, even incorporating documentary footage of its own into a suspense storyline. It’s developed a cult following over the decades, and Torres interviews many of its most passionate admirers in the film industry. As Torres tries to find the enigmatic director Manuel Lamas, who seemingly disappeared without a trace following his infamous film, he can only locate some of his collaborators … and they refuse to speak on camera, back out of scheduled interviews, or talk about their time on the film with sadness and anger. What happened during the making of that film? Torres discovers that Lamas was a profoundly difficult director, battling his own creative demons and inflicting that tension on his cast and crew. And Lamas was also responsible for a varied and now-forgotten body of work that went largely unseen, financed through mysterious means, rejected by even its intended video store audience. As Torres continues to hunt for Lamas and more information about these strange films, the documentary also investigates our collective fascination with cult movies, underground culture, and the elusive and obscure. “Straight to VHS” weaves a tantalizing documentary investigation, one that goes beyond just a single cult movie and its cryptic creator, and probes into cinematic obsession itself. Includes the Original Spanish language version of “Acto de Violencia en un Joven Periodista” (Act of Violence In a Young Journalist) with English subtitles. From IndiePix … In “Presagio” (2015 –Argentina), starring Carlos Piñeiro, Javier Solis, Matías Salinas and Valeria Salinas, a young writer, traumatized by the death of his wife and kid describes his disturbing experiences to a psychiatrist. Meanwhile, a mysterious man, hidden under an umbrella, forces him to finish his book regardless of the cost or its consequences. From IndiePix … “Outside the Law” (2010 — Algeria, France), starring Jamel Debbouze, Roschdy Zem, Sami Bouajila, Chafia Boudraa and Bernard Blancan, is the story of three brothers who fight for Algeria’s independence from France after World War II. After losing their family home in Algeria, three brothers are scattered across the globe. Messaoud joins the French army fighting in Indochina; Abdelkader becomes a leader of the Algerian independence movement; Said moves to Paris to make his fortune in the shady clubs and boxing halls of Pigalle. Gradually, their interconnecting destinies reunite them in the French capital. On Blu-ray from Cohen Media Group. rural village. For years, she has only been a shadow of herself. But when she enters “U,” a massive virtual world, she escapes into the online persona of Belle, a gorgeous and globally-beloved singer. One day, her concert is interrupted by a monstrous creature chased by vigilantes. As the hunt escalates, Suzu embarks on an emotional and epic quest to uncover the identity of this mysterious “beast” and to discover her true self in a world where you can be anyone. On DVD, Blu-ray/DVD Combo, from GKIDS/Shout! Factory. Read more here.

“Sunken Roads” (2021): Don McCarthy was 20 years old on D-Day, when his infantry division landed on Omaha Beach. Don and the other veterans who survived D-Day will someday soon have passed into memory and legend. This realization inspires 20-year-old filmmaker Charlotte Juergens to join Don and seven other D-Day vets on a journey to France – a commemorative pilgrimage to Omaha Beach for the 70th anniversary of the invasion. The vets come to see Charlotte as a granddaughter, trusting her with their stories as they confront the trauma that still haunts them 70 years after the war. In capturing their lives, Sunken Roads offers an intergenerational perspective on D-Day, presenting the memories of 90-year-old combat veterans through the eyes of a 20-year-old woman. On DVD, Blu-ray, from First Run Features. Read more here.

“Great Escapes with Morgan Freeman: Season One” (2020-21) is an eight-part docuseries that explores some of the most infamous prison escapes in history — from Alcatraz and Rikers Island to Germany’s Stalag Luft III and HM Prison Maze in Belfast. Featuring dramatic recreations and cutting-edge visual effects, along with interviews with some of the prisoners themselves, their families, their cell mates and guards who were there. Hosted and narrated by Morgan Freeman. From Lionsgate … “Succession: The Complete Third Season” (2021) is a three-disc set with all nine episodes. The critically acclaimed drama series tracks the lives of a wealthy patriarch and his four grown children, who control one of the biggest media and entertainment conglomerates in the world. The show explores themes of power and family dynamics through the eyes of patriarch Logan Roy (Brian Cox) and his four grown children, Kendall (Jeremy Strong), Siobhan (Sarah Snook), Roman (Kieran Culkin) and Connor (Alan Ruck). Season Three finds Logan in a perilous position, scrambling to secure familial, political, and financial alliances after he was ambushed by his rebellious son Kendall. After Kendall’s impulsive decision to expose the company’s sprawling scandal, the family is left to each contemplate their own future. Tensions rise as a bitter corporate battle threatens to turn into a family civil war, with the Roy family navigating the looming questions of who will take over in a post-Logan world. From Warner.