“Trolls World Tour.” For more information on other releases this week, see the Weekly Guide to Home Video Releases.

Mike Hodges (“Flash Gordon,” “Get Carter”) wrote and directed the supernatural chiller “Black Rainbow” (1989) as a meditation on the human race’s ability to destroy the world, a gothic tale of suspense and the occult, guaranteed to send shivers down your spine. Martha 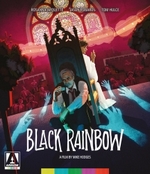 Travis (Rosanna Arquette) is a travelling clairvoyant on the road with her sceptic father (Jason Robards). During a séance Martha communicates a message from a dead man to his wife in the audience. Shocked, the wife insists her husband is still alive. Later that evening the husband is killed by a ruthless assassin. As Martha foresees more and more tragic events journalist Gary Wallace (Tom Hulce) follows the pair in pursuit of a hot story … with catastrophically eerie results. Sent direct to cable by its struggling distributor on initial release, “Black Rainbow” unfairly never got the exposure it deserved. Brand new restoration from the original negative approved by writer-director Mike Hodges, with original stereo 2.0 PCM uncompressed audio and 5.1 DTS-HD Master Audio Surround Sound options. On Blu-ray from Arrow Video/MVD Entertainment … 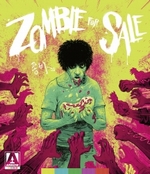 “Zombie For Sale” (2019 — South Korea) is an infectiously funny slice of modern Korean cinema where “Train to Busan,” “The Quiet Family” and “Warm Bodies” collide to create a memorable rom-zom-com from first time director Lee Min-jae. When the illegal human experiments at Korea’s biggest pharmaceutical company go wrong, one of their “undead” test subjects escapes and ends up in a shabby gas station owned by the Park family – a band of misfits spanning three generations who hustle passers-by to make ends meet. When the Park family uncover their undead visitor, he bites the head of their household, who instead of transforming into an undead ghoul becomes revitalized and full of life. The family then hatch a plan to exploit this unexpected fountain of youth, allowing locals to pay to be bitten too, until things go wrong. With a cabbage-munching zombie who prefers ketchup over blood, and a dysfunctional family that gives the Kim family of “Parasite” a run for their money, “Zombie for Sale” will warm the deadest of hearts and breathe some new life into the zombie genre.On Blu-ray from Arrow Video/MVD Entertainment … 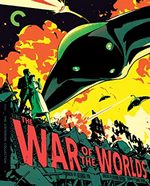 In “The War of the Worlds” (1953), a mysterious, meteorlike object has landed in a small California town. All clocks have stopped. A fleet of glowing green UFOs hovers menacingly over the entire globe. The Martian invasion of Earth has begun, and it seems that nothing — neither military might nor the scientific know-how of nuclear physicist Dr. Clayton Forrester (Gene Barry) — can stop it. In the expert hands of genre specialists George Pal and Byron Haskin, H. G. Wells’s end-of-civilization classic receives a chilling Cold War-era update, complete with hallucinatory Technicolor and visionary, Oscar-winning special effects. Emblazoned with iconographic images of 1950s science fiction, “The War of the Worlds” is both an influential triumph of visual imagination and a still-disquieting document of the wonder and terror of the atomic age.On DVD, Blu-ray, with new 4K digital restoration, with uncompressed monaural soundtrack on the Blu-ray; new alternate 5.1 surround soundtrack, created by sound designer Ben Burtt and presented in DTS-HD Master Audio on the Blu-ray. From The Criterion Collection.

In “Parts Unknown” (2019), starring William DeCoff, Alexandra Cipolla and Sarah Michelle, the world of wrestling meets the bloody battlefields of horror. After losing their livelihoods, a crazed family of disgraced professional wrestlers embarks on a spree of murder and carnage to satisfy a deal made with a demonic entity from another dimension. From Wild Eye Releasing … 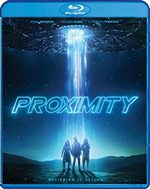 In “Proximity” (2020), starring Ryan Masson, Highdee Kuan, Shaw Jones, Christian Prentice and Don Scribne, Isaac (Masson), a young NASA scientist, is investigating a meteor crash site, when he encounters — and is abducted by — extraterrestrials. Awaking three days later with no personal recollection of what happened, but with the event recorded on his camera, he attempts to share his discovery with the world. Faced with both believers and skeptics, Isaac becomes obsessed with finding incontrovertible proof, plunging him into a journey that encompasses both the other-worldly … and the deadly. On DVD, Blu-ray, from Shout! Studios … “VHYes” (2019), starring Mason McNulty, Kerri Kenney, Thomas Lennon and Mark Proksch, is a bizarre retro comedy shot entirely on VHS; the film takes us back to a simpler time, when 12-year-old Ralph mistakenly records home videos and his favorite late night shows over his parents’ wedding tape. The result is a nostalgic wave of home shopping clips, censored pornography, and nefarious true-crime tales that threaten to unkindly rewind Ralph’s reality. On DVD, Blu-ray, from Oscilloscope Laboratories … In “Belzebuth” (2019), starring Joaquín Cosio, Tobin Bell and Tate Ellington, special agent Emanuel Ritter leads a police investigation into a series of shocking deaths. But after a priest from the Vatican finds a link between the murders and an ancient demon, a descent into horror ensues. On DVD, Blu-ray, from RLJE Films … 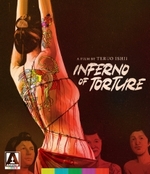 Exploitation legend Teruo Ishii (“Horrors of Malformed Men”) delivers one of his most extreme visions of violent eroticism in “Inferno of Torture” (1969 — Japan), the sixth in his abnormal love series. Tattoos and torture await women forced into servitude in Ishii’s “Inferno of Torture.” Unable to repay a local lender, Yumi (Yumika Katayama) takes up an offer to serve as a geisha for two years with a promise of freedom once her debt is repaid. She quickly realizes that this is less a house of geishas than an extremely cruel brothel specializing in supplying western visitors with tattooed playthings. Taken under the wing of one of the leading tattoo artists vying for a coveted spot in the Shogun’s good graces through his work, Yumi’s body becomes a battleground as a rival artist becomes determined not to lose his spot at the top. When the madam, Otatsu (Mieko Fujimoto) trains her eye on the blossoming relationship between the benevolent artist Horihide (Teruo Yoshida) and his model, she makes sure than her stay is less than hospitable, inspiring the torturous inferno of the title. Following Ishii’s legendary “Shogun’s Joy of Torture” and “Orgies of Edo,” the prolific filmmaker still manages to turn up the heat in this incredibly violent and salacious entry in a filmography unlike any other. From the film’s opening scene depicting some of the most perverse violence ever captured on screen, through to the shock ending that will leave the audience’s mouths agape, there’s nothing quite like “Inferno of Torture.” Tender romance clashes with vile sadism as a sea of tattooed female flesh floods nearly every frame of this film depicting Japan’s Edo period as only Ishii could. On Blu-ray from Arrow Video/MVD Entertainment … In “Blood and Money” (2020), starring Tom Berenger, Kristen Hager, Paul Ben-Victor and Mark Sivertsen, a retired veteran (Berenger) hunting in the Allagash 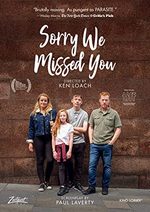 backcountry discovers a dead woman with a duffle bag full of money. He soon finds himself in a web of deceit and murder. On DVD, Blu-ray, from Screen Media Films … The British working class is once again the empathetic subject of Ken Loach’s wrenching, intimate family drama “Sorry We Missed You” (2019 — UK) that exposes the dark side of the so-called “gig economy.” Ricky, a former laborer, and his home-attendant wife Abby — who lost their home in the 2008 financial crash — are desperate to get out of their economic distress. When an opportunity comes up for Ricky to work as his own boss as a delivery driver, they trade in their only asset, Abby’s car, for a shiny new white van and the dream that Ricky can work his way up to someday owning his own delivery franchise. But the couple find their lives are quickly pushed further to the edge by an unrelenting work schedule, a ruthless supervisor and the needs of their two teenage children. Capturing the sacred moments that make a family as well as the acts of desperation they need to undertake to make it through each day, this universal story is skillfully and indelibly told with unforgettable performances and a searing script by Loach’s long-time collaborator Paul Laverty. Stars Kris Hitchen, Debbie Honeywood, Rhys Stone, Katie Proctor, Ross Brewster and Charlie Richmond. On DVD from Zeitgeist Films.

“Disclosure” (2019 — Australia), starring Mark Leonard Winter, Geraldine Hakewill, Matilda Ridgway, Tom Wren and Greg Stone, is a drama that follows two couples who go to war over an allegation of child-on-child abuse. Australian documentary-maker Emily and her journalist husband Danny are reeling from an allegation of abuse their 4-year-old daughter Natasha has made against a local politician’s 9-year-old son, Ethan. Ethan’s parents, Joel and Bek, arrive unannounced at Emily and Danny’s house intent on convincing the couple that Natasha’s allegation is a fabrication. Accusations, arguments, and the ultimate search for leverage turn their civil conversation into a vicious confrontation.From Breaking Glass Pictures … In “Hope Gap” (2020), starring Annette Bening, Bill Nighy, Josh O’Connor and Aiysha Hart, Grace (Bening) lives an idyllic life until her 29-year marriage to Edward (Nighy) abruptly ends, leaving their only son (O’Conner) to pick up the pieces. As life unravels, Grace discovers it’s never too late to be happy. On DVD, Blu-ray, from Screen Media Films.

“The Prince” (2019 — Chile), starring Juan Carlos Maldonado, Alfredo Castro and Gastón Pauls, is a prison drama set in a repressive 1970s Chilean prison. During a night of heavy drinking, 20-year-old Jaime unaccountably stabs his best friend. He is sent to jail for murder and there, alone and afraid, he comes under the protection of a tough older inmate known as “The Stallion.” The unlikely pair begin a clandestine romance but violent power struggles inside the penitentiary threaten their bond. A story of survival and love that takes its inspiration from Jean Genet’s “Un Chant d’amour” and Fassbinder’s “Querelle” in its affecting exploration of masculine aggression, conflicting loyalties and pent-up sexual desires. On DVD, Blu-ray, from Artsploitation Films.

Available for the first time in North America, the new movie “Digimon Adventure: Last Evolution Kizuna” (2020– Japan) features the last adventure of Tai and Agumon. Includes both versions – English voice cast and the original Japanese audio with English subtitles. Now on the cusp of adulthood, Tai and his DigiDestined friends discover that with age their bonds with each of their Digimon will ultimately break. How does it end for Tai, Agumon and the others? On DVD, Blu-ray/DVD Combo, from Shout! Factory.

“Slay the Dragon” (2019): Ten years ago, a secretive high-tech gerrymandering initiative was launched with only one mission in mind: undermine American democracy. Although gerrymandering — the practice of redrawing electoral maps to serve a single party — has been around for over a century, in today’s hyper-partisan political environment it has been taken to unprecedented extremes, fueled by the elimination of corporate campaign contribution limits and the availability of vast amounts of personal information. Directed by Barak Goodman (“Woodstock,” “Oklahoma City”) and Chris Durrance (“Gerald R. Ford: A Test of Character”), “Slay the Dragon” follows the real-life stories of everyday people fighting on the front lines to make sure their vote matters. As the 2020 Census approaches, American democracy is once again defending itself against those who might aim to manipulate district boundaries in an effort to sway elections. Now more than ever before, activists are taking a stand, making their voices heard and giving power back to the American people. From Magnolia Home Entertainment.