In 1970, young first-time director Dario Argento made his indelible mark on Italian cinema with “The Bird With the Crystal Plumage” (1970– Italy), a film that redefined the “giallo” genre of murder-mystery thrillers and catapulted him to international stardom. Sam 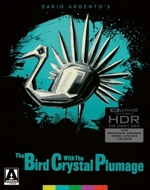 Dalmas (Tony Musante), an American writer living in Rome, inadvertently witnesses a brutal attack on a woman (Eva Renzi) in a modern art gallery. Powerless to help, he grows increasingly obsessed with the incident. Convinced that something he saw that night holds the key to identifying the maniac terrorizing Rome, he launches his own investigation parallel to that of the police, heedless of the danger to both himself and his girlfriend Giulia (Suzy Kendall). A staggeringly assured debut, “The Bird With the Crystal Plumage” establishes the key traits that would define Argento’s filmography, including lavish visuals and a flare for wildly inventive, brutal scenes of violence. With sumptuous cinematography by Vittorio Storaro and a seductive score by legendary composer Ennio Morricone, this landmark film has never looked or sounded better in this brand new 4K Ultra HD presentation. On Blu-ray in a UHD Limited Edition from Arrow Video/MVD Entertainment … In “Brotherhood of the Wolf” (2001 — France), in a rural province of France, a mysterious creature is laying waste to the countryside, savagely killing scores of women and children. Unseen, possessed of enormous strength and a human intelligence, the beast has eluded capture for years. King Louis sends in a renowned scientist and his Iroquois blood brother, an unconventional team whose combined methods and capabilities may bring the beast down. But the true nature of the beast is not what anyone could have anticipated. Director’s extended cut. In a Blu-ray debut from Scream Factory. Read more here … In the mid-1960s, the runaway success of Sergio Leone’s “Dollars” trilogy gave rise to an explosion of similar productions as filmmakers by the dozen sought to capitalize on this new, uniquely Italian take on the Western, characterized by their deeply cynical outlook, morally compromised antiheroes and unflinching depictions of savage 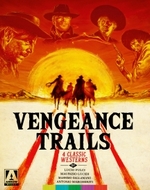 violence. The specially curated selection “Vengeance Trails: Four Classic Westerns [Limited Edition]” gathers together four outstanding examples of the genre from the height of its popularity, all centered around a theme of revenge. In Lucio Fulci’s “Massacre Time” (1966), Franco Nero and George Hilton star as estranged brothers forced to band together against the powerful businessman and his sadistic son who’ve seized control of their hometown. In Maurizio Lucidi’s “My Name is Pecos” (1966), Robert Woods stars as the eponymous Mexican gunslinger, returning to Houston to settle a long-standing score against the racist gang boss who wiped out his entire family. In Massimo Dallamano’s “Bandidos” (1967), Enrico Maria Salerno plays a former top marksman who, years after being maimed by a former protégé, teams up with a fresh apprentice to get his revenge against the man who betrayed him. Finally, in Antonio Margheriti’s “And God Said to Cain” (1970), the inimitable Klaus Kinski stars as a man who has spent the last decade in a prison work camp for a crime he didn’t commit and who, upon his release, immediately sets out to wreak vengeance on the men who framed him. Featuring a wealth of key Euro cult talent both behind and in front of the camera, these four classic westerns are presented in sparkling high definition restorations, three of them produced specially for this release, alongside a plethora of brand new bonus materials. In a four-disc Blu-ray set from Arrow Video/MVD Entertainment … In “The Dead Zone” (1983), school teacher Johnny Smith (Chistopher Walken) had a beautiful fiancée, a rewarding career and a fortunate life … until one tragic accident changed everything. After slamming into an 18-wheeler, Johnny is plunged into a five-year coma. When he awakens, he finds his true collision was with destiny – he now has the remarkable gift (or curse) of seeing into the future. From horror master Stephen King and director David Cronenberg, this supernatural thriller turns an everyday guy into a reluctant hero … saving children in danger, helping the police and finding a serial killer. But Johnny’s next vision may be his most terrifying yet. New 4K scan of the original camera negative. In a Blu-ray debut from Scream Factory … Director George Stevens’ masterwork “A Place in the Sun” (1951) won six Academy Awards and is widely considered one of the finest works of America cinema. Remastered from a 4K film transfer in celebration of its 70th anniversary, the film is presented on Blu-ray with a brand-new Filmmaker Focus featuring film historian Leonard Maltin talking about Stevens and the innovative film techniques he used for this unforgettable story of ambition, passion, and betrayal. The disc also includes previously released bonus content, including commentary by George Stevens, Jr. and Ivan Moffat, retrospective cast and crew interviews, and a segment on George Stevens featuring filmmakers who knew him. Montgomery Clift stars as George Eastman, a young man determined to win a place in respectable society and the heart of a beautiful socialite (Elizabeth Taylor). Shelley Winters is the factory girl whose dark secret threatens Eastman’s professional and romantic prospects. The limited-edition Paramount Presents Blu-rays come in collectible packaging featuring a foldout image of each film’s theatrical poster and an interior spread with key movie moments. Each disc also includes access to a digital copy of the film. From Paramount Presents.

“American Gods: Season Three” (2021) is a three-disc set with all 10 episodes. In Season Three of “American Gods,” dangerous secrets intensify the inevitable war building between the Old Gods of mythology and the New Gods of technology. When Shadow Moon discovers that his boss, Mr. Wednesday, is not only one of the Old Gods but is also his father, Shadow attempts to break away and find his own path. Guided on this spiritual journey by the gods of his black ancestors, the Orishas, Shadow puts down roots in the idyllic, snowy town of Lakeside, Wisconsin — but this small town holds dark and bloody secrets that force him to accept his destiny. Rather than facing a choice between divinity or humanity, Shadow must now decide just what kind of god he wants to be. On DVD, Blu-ray + Digital Code, from Lionsgate.

The crazy family comedy “Joey & Ella” (2021), starring Ashton Leigh, Britt Allen and Skip Schwink begins as two bumbling jewel thieves lose the mysterious Mazinski Diamond. The jewel is pocketed by a baby circus kangaroo that escapes to a nearby barn and is found by Ella, a lonely teen who names the critter Joey. But the magical gem causes Joey to grow quickly and gain the power of speech. Soon the thieves, the cops, and Joey’s owners are all hunting for the mischievous roo and the alien crystal. From Lionsgate … The shocking French thriller “Baise-Moi (aka Rape Me)” (2000) tells the story of two young women who go on a violent spree against a society in which they feel marginalized. One of them, Manu, is brutally raped by a group of savage thugs. The other, Nadine, sells her body but refuses to give up her soul. Chance unites them and together they decide to alter their destinies. Angry at the world, they embark on a twisted, rage-filled road trip, leaving a trail of mischief and dead bodies in their wake. Written and directed by Virginie Despentes and Coralie Trinh Thi from Despentes’ novel, this raw, explosive film continues to stir controversy with its graphic mix of high-impact violence and explicit sex scenes. On DVD, Blu-ray, from Kino Lorber Studio Classics … Adapted from the prolific author’s books, the “V.C. Andrews’ Landry Family 4-Movie Series” (2021) follows the story of Ruby Landry as she digs deeper into the roots of her mysterious family tree. Raised by her grandmother in the Louisiana bayou, Ruby gets caught up in a web of dark secrets and betrayal over the course of four Lifetime Original movies — “Ruby”, “Pearl in the Mist,” “All That Glitters” and “Hidden Jewel” — starring Raechelle Banno, Karina Banno, Naomi Judd, Gil Bellows, Lauralee Bell, and Ty Wood. From Lionsgate … In “Midnight in the Switchgrass” (2021), starring Megan Fox, Bruce Willis, Emile Hirsch, Lukas Haas, Colson Baker, Caitlin Carmichael and Sistine Stallone, while in Florida on another case, FBI agents Helter (Willis) and Lombardo (Fox) cross paths with state cop Crawford (Hirsch), who’s investigating a string of female murders that appear to be related. Lombardo and Crawford team up for an undercover sting, but it goes horribly wrong, plunging Lombardo into grave danger and pitting Crawford against a serial killer in a twisted game of cat and mouse. On DVD, Blu-ray, from Lionsgate. Read more here.

In “Welcome Matt” (2021), starring Tahj Mowry, Deon Cole and Jazsmin Lewis, Matt, a well known writer and director, suffers a traumatic experience that leads to him being deathly afraid to go outside … so he decides to write, direct, and star in a feature film, all from his apartment. From Gravitas Ventures … In “Women” (2021), starring Anna Marie Dobbins, Anna Maiche and Denise Gossett, a small town detective while investigating the disappearance of a local woman comes across an unassuming sociology professor who lives a double life. From Gravitas Ventures.

“Wet Season” (2019 — Singapore/Taiwan), starring Yann Yann Yeo, Jia Ler Koh, Christopher Ming-Shun Lee and Shi Bin Yang, was Singapore’s official submission to the 93rd Academy Awards. Ling is a Chinese language teacher at a high school in Singapore. Her life is fraying as she struggles with a subject her students are disinterested in, a distant husband at home, the care of her elderly father-in-law, and her fight to conceive a child, all in a country that’s not her own. But when she orders extra lessons for her student Wei Lun, the two become close and Ling finds a new way to reaffirm her identity as a woman. From Strand Releasing.