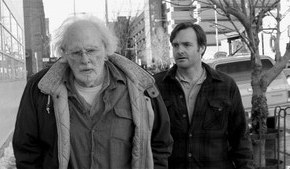 I’m not quite sure whether director Alexander Payne is laughing with or at the characters in his critically acclaimed film about the perambulations of Woody Grant, a booze-addled old man, and his estranged son, as they travel from Montana to Nebraska to claim the “fortune” the senior citizen thinks he “won” as per a Publishers Clearing House-type sweepstakes letter. Along the way they stop off at Woody’s home town, Hawthorne, Nebraska, where he meets up with relatives, friends and enemies, and settles some old scores. The film is riddled with unlikable characters (from lead Bruce Dern on down to most of the supporting actors), silly sequences and implausible situations. Shot in black and white (for no apparent reason other than to show how monochromatic the lives of these middle-Americans are), the film co-stars Will Forte as Woody’s son, June Squibb as Woody’s long-suffering wife, and Stacy Keach as a grudge from the past. Blu-ray Extras: “The Making of Nebraska” six-part featurette: “The Script,” “Cast and Characters,” “Locations,” “Shooting in Black and White,” “Working with Alexander,” “A Film Family.” Vitals: Director: Alexander Payne. Stars: Bruce Dern, Will Forte, June Squibb, Stacy Keach, Bob Odenkirk, Rance Howard, Mary Louise Wilson, Tim Driscoll, Kevin Kunkel, Angela McEwan, Devin Ratray. 2013, CC, MPAA rating: R, 115 min., Comedy, Box office gross: $9.861 million, Paramount.