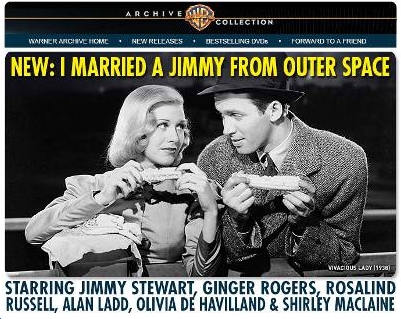 OF HUMAN HEARTS (1938) James Stewart had one of his first major starring roles in this Ante-and-Bellum family saga about a prideful son’s feud with his preacher father. Scorning at his father’s life of poverty and self-sacrifice, Jason Wilkins (Stewart) pursues success as a surgeon in the North before the Civil War intervenes to teach Jason the true cost of neglect thanks to an executive-in-chief intervention. Walter Huston plays the padre who tries to teach his headstrong scion the importance of sacrifice, while Beulah Bondi plays the mother whose love knows no bounds. Beulah would go on to play Stewart’s mother four more times, including an episode of The Jimmy Stewart Show, now available for streaming on Warner Archive Instant. Co-starring John Carradine, Guy Kibbee, Charles Coburn, Ann Rutherford and legendary TV producer-to-be Gene Reynolds. Newly Remastered

VIVACIOUS LADY (1938) Ginger personally selected Jimmy Stewart to play her romantic co-star in this riotous romance, and he proves to be the perfect man for the job. When a sizzling night club singer (Rogers) romances and weds a buttoned-down botany professor (Stewart) over the course of a single evening, sparks and subterfuge ensues. Stars start crossing against the newlyweds when they travel to Morgan¹s moss-backed college town to break the news to Morgan¹s disapproving family (Beulah  Bondi and Charles Coburn) but can’t bring themselves to do it forcing the pair to conducted their marriage incognito. Director George Steven¹s first outing as a producer is a delight. Newly Remastered

NO TIME FOR COMEDY (1940) James Stewart’s rich gifts for drama, romance and comedy already propelled him on a meteoric rise when he was paired with the very lively and very lovely Rosalind Russell in this screwball classic set amidst the bright lights of Broadway. Russell plays the acting gal how knows it all while Stewart is the hick from the sticks with a flair for the funny. It’s love at first line reading for the pair but when a wanna-be muse (Genevieve Tobin) convinces Stewart’s comedy king he should try his hand at serious drama, the romance hits the rocks. Charles Ruggles plays the cynical industrialist spouse of the drama wannabe that squares up the triangle. William Keighley directs with a script by master scribes Julius and Philip Epstein.

Power to the Paramounts!

BRANDED (1950) This big screen adaptation of Max Brand’s Montana Rides! finds celluloid cowboy icon Alan Ladd donning the boots of Choya, a gunfighter comprised of complicated ethics. Choya gets roped into a scheme to impersonate a wealthy rancher¹s long lost son – which works – until he starts to fall for his “sister.” The shame becomes too much for Choya to bear, so he sets out to make-up for the wrong he has done. With Mona Freeman, Charles Bickford, and Robert Keith, directed by Rudolph Maté.

I MARRIED A MONSTER FROM OUTER SPACE (1958) Too often dismissed as a retread of the paranoid cold war classic, Invasion of the Body Snatchers, I Married a Monster from Outer Space is a classic creeper in its own right, remixing cold war chills with post-nuclear family anxiety along with a nod to seminal Sci-Fi show, It Came From Outer Space. Newlywed Marge Farrell (Gloria Talbott) grows increasingly alarmed over the changes in her new husband Bill (Tom Tryon), who’s been acting stranger and stranger since their wedding night. Determined to find out what’s happening to her man, Marge stumbles onto a terrifying plan and now must convince someone – anyone – to believe her…

THE ADVENTURERS (1970) Troubled playboy Dax (Bekim Fehmiu)uses romance as a stepping stone to success… all while scheming to bring vengeance on those who once wronged him and his family. A Monte Cristo for the jet-set, Candice Bergen, Olivia de Havilland, Ernest Borgnine, Rossano Brazzi, Charles Aznavour and more star in this lavish adaptation of the lurid Harold Robbins pot-boiler, under the direction of Lewis Gilbert.

THE EVENING STAR (1996) Shirley MacLaine reprises the character of Aurora Greenway in this follow-up to the smash-hit and award-strewn Terms of Endearment. The next generation confronts Aurora with as many challenges as ever, as she tries her best to raise her beloved daughter’s rebellious and troubled brood. With Bill Paxton, Miranda Richardson, Marion Ross and Juliette Lewis. Directed by Robert Harling.

FALL TO GRACE (2013) Alexandra Pelosi depicts the extraordinary journey of ex-New Jersey Governor Jim McGreevey in this remarkable documentary. From one of the worst political scandals of the decade and his outing as a closeted gay man, to his life’s “second act” and its spiritual quest where he studies to become an Episcopal priest, McGreevey’s journey is one of redemption and transformation. This is a true tale of second chances, which McGreevey says everybody deserves. “No one should be defined by the nadir of their existence,” he says. “That shouldn’t define the entirety of their narrative.”