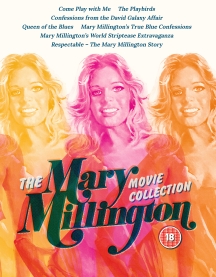 This collector’s edition five-disc set is a must for any fan of the English model and sexploitation star Mary Millington.  Filled with scintillating new extras, packaged in a collectable case (displaying brand new artwork throughout) and including a huge 80-page book, written by biographer Simon Sheridan (author of Keeping the British End Up: Four Decades of Saucy Cinema) and with an introduction by producer David Sullivan.