“Mandela: Long Walk to Freedom” is a straight-ahead look 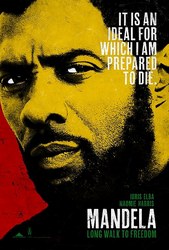 at the life and times of Nelson Mandela, the South African lawyer who, in the 1960s, became radicalized by the horrors of apartheid, joined and help lead the African National Congress, was imprisoned by the government for 27 years and finally, when released, became South Africa’s first democratically elected president, from 1994 to 1999. The film chronicles his early life, education, marriage to Winnie Mandela, prison sentence and his efforts to rebuild the country’s once segregated society. “Mandela” the film is stirring in its depiction of the horrors of segregation and slavery, and sets out to do three things: tell Mandela’s story, depict the struggle for freedom by African blacks, and paint the Afrikaner overlords as the horrible monsters they most likely were. It succeeds — enjoyably — on all levels. And Idris Elba is insanely great as Mandela. Extras: “Mandela: The Leader You Know, The Man You Didn’t” featurette, commentary with Director Justin Chadwick. Blu-ray adds behind-the-scenes featurettes and a tribute video gallery. Vitals: Director: Justin Chadwick. Stars: Idris Elba, Naomi Harris, Tony Kgoroge, Riaad Moosa. 2013, CC, MPAA rating: PG-13, 141 min., Bio-Drama Box office gross: $8.079 million, The Weinsterin Co./Anchor Bay.