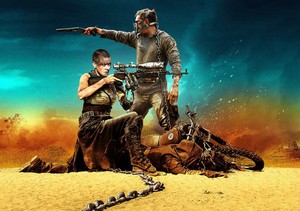 Thirty-four years after ex-Aussie cop Max Rockatansky wandered into the Wasteland at the end of “Mad Max 2: The Road Warrior,” the iconic hero returns to the big screen — but not as you remember him. Dragging his shattered leg into the end credits, Max was a hero. Now, he’s all-too human and guilt ridden about the people he left behind. It’s many years after the collapse of civilization, and the tyrannical Immortan Joe enslaves the apocalypse survivors inside a desert fortress known as the Citadel, where he controls the water supply and enforces his power with the War Boys. When the warrior Imperator Furiosa (Charlize Theron) leads the despot’s five wives in a daring escape, she forges an alliance with Max (Tom Hardy), who had been captured by the War Boys to become a “blood bag” (blood donor for the fighters weakened by radioactive poisoning). Fortified in the massive, armored truck the War Rig, they try to outrun the ruthless warlord and his henchmen in a deadly high-speed chase through the Wasteland. A reimagining/sequel of the classics “Mad Max” and “The Road Warrior” (two films that set the standard for post-apocalyptic landscapes and wastelands) by the man who made them both: George Miller. It’s a breathtaking non-stop thrill ride mostly devoid of story line except for the mad rush to freedom (and spiritual redemption) against impossible odds by Max, Furiosa and the wives. It’s violent, outrageous, and crazy — just what a Mad Max movie ought to be. And by making Furiosa the strong central protagonist of the outing, the film sets new standards for Hollywood heroes. The only real shortcoming: the almost indecipherable Aussie accents for the first 20 minutes of the film (overcome, thankfully, with the judicious use of English subtitles on the DVD). Hugh Keays-Byrne, who plays Immortan Joe here, played the Toecutter in the original “Max.” And more than 80% of the effects seen in the film are real (not CGI): stunts, make-up and sets. The attention to detail — all the sets and props are made from salvaged goods, just like they would be in a post-industrial society — and the cars — literally hundreds of hand-made, souped up monster cars, hot rods, trucks, tankers, and even a tank, all sporting supercharged and nitro-charged V8s — is utterly astonishing. Sit back and enjoy an action film the way it’s supposed to be made — and by a pair of 70-year-olds to boot (Miller is 70, cinematographer John Seale is 72). Vitals: Director: George Miller. Stars: Tom Hardy, Charlize Theron, Nicholas Hoult, Hugh Keays-Byrne, Nathan Jones, Zoe Kravitz, Keough, Rosie Huntington-Whiteley, Abbey Lee, Courtney Eaton, Josh Helman, Jennifer Hagan, iOTA, John Howard, Richard Carter, Megan Gale, Angus Sampson, Joy Smithers, Gillian Jones, Melissa Jaffer and Melita Jurisic. 2015, CC, MPAA rating: R, 120 min., Action, Box office gross: $151.104 million, Warner. Extras: Extras include six well-thought out behind-the-scenes featurettes that — unlike most such featurettes that are short YouTube-like promos — actually intelligently delve into the production: “Maximum Fury: Filming Fury Road,” about the stunts and car chases; “Mad Max: Fury on Four Wheels,” about the myriad vehicles used in the production (“V8, V8, V8, V8”); “The Tools of the Wasteland,” about the set design and props; “The Road Warriors: Max and Furiosa,” “The Five Wives: So Shiny, So Chrome,” and “Fury Road: Crash & Smash,” deleted scenes.