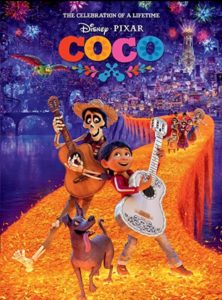 Coco is a 2017 computer-animated fantasy film produced by Pixar Animation Studios and released by Walt Disney Pictures. The film is based on the original idea by Lee Unkrich who directed the movie and was co-directed by Adrian Molina.

The concept of the film derives from the Mexican holiday known as Day of the Dead and follows a 12-year-old boy by the name of Miguel (Anthony Gonzalez), from a musically inclined family that has generationally banned music in their household.

Passionate about music, Miguel is accidentally transported into the land of the dead where he meets numerous people who assist him on his journey of unlocking the true story behind his family history. Starring voice overs from Anthony Gonzalez, Gael García Bernal, Benjamin Bratt, Alanna Ubach, Renée Victor, Ana Ofelia Murguía and Edward James Olmos.

Growing up is not easy, especially for Riley (Kaitlyn Dias), who relocates to a new town when her dad starts a new job. Trying to adjust to her newfound life and surroundings, Riley is guided by her emotions – Joy, Fear, Anger, Disgust and Sadness, which live in the emotions headquarters in her brain and control her mind.

The film explores the life of Moana Waialiki, a sea voyaging enthusiast who’s the only daughter of a Polynesian chief. Moana becomes chosen by the ocean to reunite a mystical relic with the goddess Te Fiti. Her island gets struck by a blight resulting in Moana setting sail in search of Maui in the hopes of returning the relic to Te Fiti and saving her people.

The film is set in ancient China, long before the best slots games were around, where an enormously enthusiastic and clumsy Panda known as Po (Jack Black), was strangely chosen as the prophesied Dragon Warrior. Despite being initially doubted, Po was set on proving himself to become a Kung Fu master. With the guidance and leadership of their guru, Master Shifu, Po becomes responsible for defending everyone from an oncoming threat by turning his greatest weakness into his greatest strength.

How to Start Scriptwriting? Why Is it Better to Delegate?