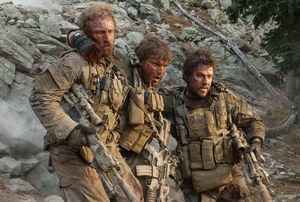 Based on The New York Times best-selling true story of heroism, courage and survival, “Lone Survivor” tells the incredible tale of four Navy SEALs on Operation Red Wings, a covert mission to neutralize a high-level al-Qaeda operative deep in the mountains of Afghanistan. The four men must make an impossible moral decision in the mountains of Afghanistan that leads them into an enemy ambush. As the confront unthinkable odds, the SEALs must find reserves of strength and resilience to fight to the finish. Extras: “Bringing the Story to Light” behind-the-scenes featurette, “The Fallen Heroes of Operation Red Wings” profile of the real-life heroes. Blu-ray adds “Will of the Warrior” in-depth look at Marcus Luttrell, the real-life Navy SEAL who received the Navy Cross and Purple Heart for his actions in Operation Red Wings; “Recreating the Firefight” featurette; “Learning the Basics” SEAL training for the four leads; “The Pashtun Code of Life” featurette. Vitals: Director: Peter Berg. Stars: Mark Wahlberg, Taylor Kitsch, Eric Bana, Emile Hirsch, Ben Foster, Ali Suliman, Alexander Ludwig, Yousuf Azami, Sammy Sheik. 2014, CC, MPAA rating: R, 122 min., Action-Drama-War, Box office gross: $125.069 million, Universal.