Due to unforeseeable production delays, the TERMINATOR 2: JUDGMENT DAY ENDOARM 4K UHD LIMITED COLLECTOR’S EDITION and 4K Ultra HD have been postponed and will not be released on the previously announced date.

Lionsgate does not have a new street date to announce at this time, but please know that they are working as quickly as possible to resolve these issues and deliver a product worthy of Terminator 2: Judgment Day’s biggest fans.

We apologize for the delay and hope you will continue to support this amazing title as Lionsgate aims to work diligently towards the creation of a quality product that collectors are sure to love.

The set was originally schedule for October 3, then moved to October 31.

(1991) Arnold Schwarzenegger, Linda Hamilton, Edward Furlong, Robert Patrick. Director James Cameron’s iconic sci-fi action classic returns when “Terminator 2: Judgment Day” arrives in a Limited Collector’s Edition EndoArm box set including a 4K Ultra HD Combo Pack (plus Blu-ray and Digital HD). Still lauded by critics today as one of the greatest action films of all time, only 6,000 of the Limited Collector’s Edition EndoArm box sets will be released in the U.S., allowing fans to own a life-sized replica of the T-800 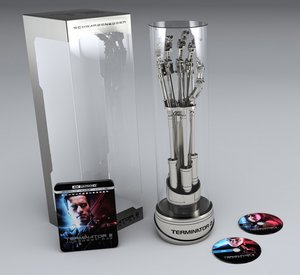 EndoArm mounted on a uniquely numbered stand with James Cameron’s signature. Say “hasta la vista, baby” to SD and relive each quintessential moment in four times the resolution with Full HD and High Dynamic Range on the film’s first-ever 4K scan. “The Terminator 2: Judgment Day” EndoArm Limited Collector’s Edition 4K Combo Pack box set is loaded with bonus content, including an all-new, never-before-seen documentary featuring commentary from the cast and crew (including James Cameron, Arnold Schwarzenegger, and Edward Furlong), and will be available for the suggested retail price of $174.99. The groundbreaking masterpiece will also be available as a standalone 4K Ultra HD Combo Pack (plus Blu-ray and Digital HD for the suggested retail price of $22.99. Extras: New “T2: Reprogramming the Terminator” 55 Minute Documentary including exclusive interviews with Arnold Schwarzenegger, James Cameron, Edward Furlong and more; two feature commentaries including 23 members of the cast and crew, including Cameron and co-author William Wisher; “The Making of T2” 30 minute featurette; seamless branching to view three different versions of the movie; two deleted scenes with audio commentary; trailers. (Lionsgate).