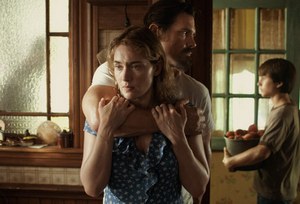 Based on the New York Times best-selling novel by Joyce Maynard, this lilting melodrama is told from the point-of-view of 13-year-old Henry Wheeler, who struggles to be the man of his house and care for his reclusive mother Adele while confronting all the pangs of adolescence. On a back-to-school shopping trip during the Labor Day weekend, Henry and Adele encounter Frank Chambers, a man both intimidating and clearly in need of help, who convinces them to take him into their home and later reveals that he’s an escaped convict. The events of this long Labor Day weekend will shape them for the rest of their lives. Blu-ray extras: Commentary by director Jason Reitman, director of photography Eric Steelberg and first assistant director/co-producer Jason Blumenfeld; “End of Summer: Making Labor Day”; deleted scenes. Vitals: Director: Jason Reitman. Stars: Kate Winslet, Josh Brolin, Gattlin Griffith, Tobey Maguire, Tom Lipinski, Maika Monroe, Clark Gregg, James Van Der Beek, J.K. Simmons, Brooke Smith. 2014, CC, MPAA rating: PG-13, 111 min., Drama, Box office gross: $13.362 million, Paramount.