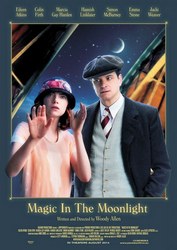 Other Recent Announcements:
“Hercules,” “Let’s Be Cops,” “If I Stay,” “The Expendables 3,” “The Hundred-Foot Journey,” “Teenage Mutant Ninja Turtles.”

“Magic in the Moonlight” Due December 16:

A master magician (Colin Firth) tries to expose a psychic medium (Emma Stone) as a fake. Set in the 1920s on the opulent Riviera in the south of France. Chinese conjuror Wei Ling Soo is the most celebrated magician of his age, but few know that he is the stage persona of Stanley Crawford (Firth), a grouchy and arrogant Englishman with a sky-high opinion of himself and an aversion to phony spiritualists’ claims that they can perform real magic. Persuaded by his life-long friend, Howard Burkan (Simon McBurney), Stanley goes on a mission to the Cote d’Azur mansion of the Catledge family: mother Grace (Jacki Weaver), son Brice (Hamish Linklater), and daughter Caroline (Erica Leerhsen).
He presents himself as a businessman named Stanley Taplinger in order to debunk the alluring young clairvoyant Sophie Baker (Stone) who is staying there with her mother (Marcia Gay Harden). Sophie arrived at the Catledge villa at the invitation of Grace, who is convinced that Sophie can help her contact her late husband, and once there, attracted the attention of Brice, who has fallen for her head over heels. From his very first meeting with Sophie, Stanley dismisses her as an insignificant pip-squeak who he can unmask in no time, scoffing at the family’s gullibility. To his great surprise and discomfort, however, Sophie accomplishes numerous feats of mind-reading and other supernatural deeds that defy all rational explanation, leaving him dumbfounded. Before long, Stanley confesses to his beloved Aunt Vanessa (Eileen Atkins) that he has begun to wonder whether Sophie/s powers could actually be real. Is this proof of a world beyond the laws of physics or has he fallen under the sway of a more earthly chemistry? Extras: “Behind the Magic” production featurette, “On the Red Carpet: Los Angeles Film Premiere.” Vitals: Director: Woody Allen. Stars: Emma Stone, Colin Firth, Marcia Gay Harden, Hamish Linklater, Jacki Weaver, Eileen Atkins, Erica Leerhsen, Simon McBurney, Jeremy Shamos, Catherine McCormack. 2014, CC, MPAA rating: PG-13, 98 min., Comedy, Box office gross: $10.323 million, Sony.